The Outsiders: The Story of Teenage Struggles

The Story of Teenage Struggles 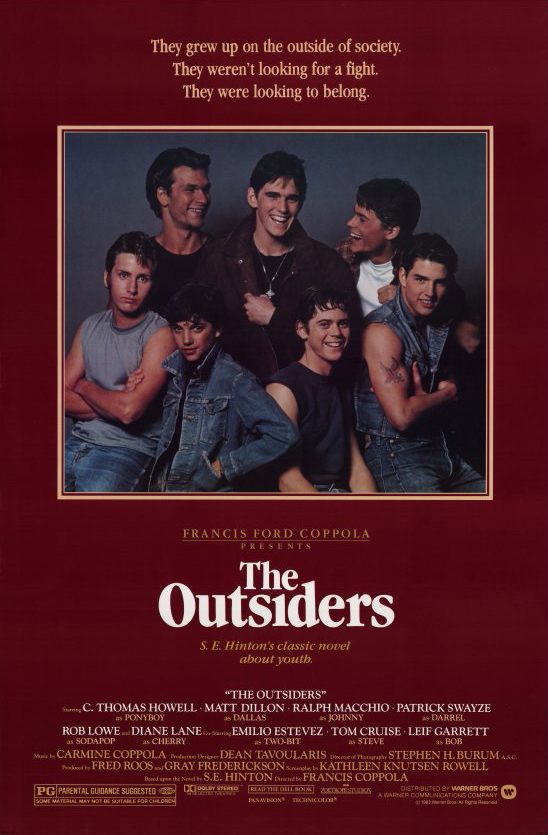 Movie Poster of the 1983 film, with the main cast of characters shown

The Outsiders was published 50 years ago, in 1967, by an 18 year old girl who had her name on the book as S.E. Hinton, since the narrator of the story was a male and she didn’t want readers to know she was a female. Almost 15 years after the books first release, Francis Ford Coppola, director of The Godfather trilogy, directed the film adaptation of Hinton’s famous book. Hinton wrote this book to bring to light a more realistic and true look to adolescent children in the young adult genre of fiction writing, while she was a teenager too, writing this book through her high school ages.

The Outsiders film, released in 1983, was a movie of a mixed bag of reviews but a movie that aimed to bring to the big screen the more dramatic yet lifelike struggles teenagers faced during the years following WWII, including violence, abuse, and isolation that they received not only from others but from parents as well. One of the many problems that was noticed in the book was how upper and lower classes effected teenagers as they grew up, and it was a view taken advantage of in many schools for the sake of teaching. However, the film of which Coppola made, alongside the guidance of S.E. Hinton, shows every one of the problems she noticed during her youth without boiling it all down to and blaming it all on social and wealth class differences.

Making the Book and the Film →