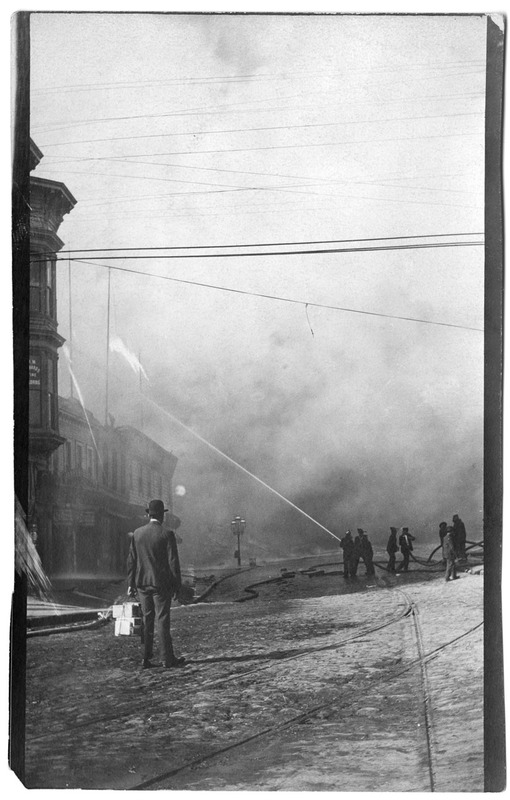 “Market and Elis looking east. Fireman at work, man taking boxes of cigars away.” [Click image to see reverse side.] 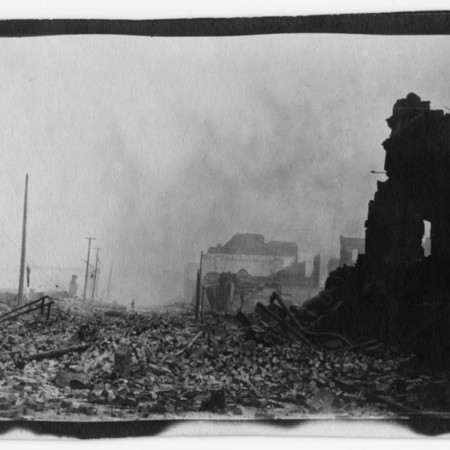 By midmorning on April 18th, the fires were growing out of control. As shown in the photograph, the Fire Department made attempts to control the blazing onslaught. However, the city’s water mains had broken in the primary disaster, making it impossible to adequately extinguish the flames. Taylor’s image on the right perfectly illustrates the despair of the fire as one solitary man stands to watch the firemen’s work. Likewise, many were forced to watch their former homes and offices burn as the fire took over the city.

As the fire spread, people rushed to get out in time. Charles Kendrick, a local businessman, remembered walking near a pile of rubble and hearing distant voices calling for help. He stopped with a few others and attempted to clear the broken pieces and save the trapped survivors. After a while, it became clear that the prisoners were buried too deeply and the fire would soon engulf anyone who stayed to help. One by one, the helpers abandoned the pile of bricks, and those imprisoned inside.

“About a week later I passed this spot again,” Kendrick wrote, “and all that was visible was the deep basement; the wooden ruins of the building had been entirely consumed. The poor souls who were caught in them must have died agonizing deaths.” 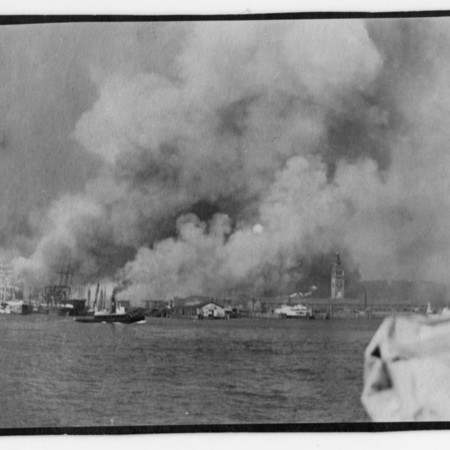 “1/4 mile from ferry showing entire water front on fire & the only remaining building of any size in town, the Ferry Building.” [Click image to see reverse side.] 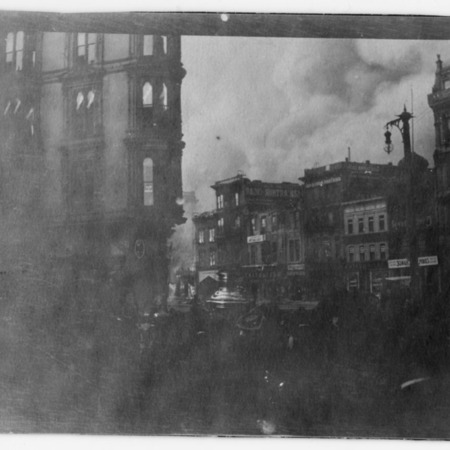 Once out of the city, people stopped to stare at the “great and ghastly” yet riveting spectacle of catastrophe. As Kendrick observed, “the entire city—from Kearny Street to the Bay, and North and South as far as the eye could see—was one solid mass of fire, with the big buildings of the Financial District shooting flames high into the heavens. The whole scene was terrifying, yet majestic and awesome beyond the power of words—a great city vanishing in flame. Hardly anyone in the group uttered a word; we just sat there spellbound to the point of speechlessness.”

As the blaze spread, the Fire Department began dynamiting buildings in the hope that they might contain the fire and perhaps save some other structures in the path of ruin.