There Were Children on the Battleground: Japanese and Filipino Youth in the Second World War: Conclusion 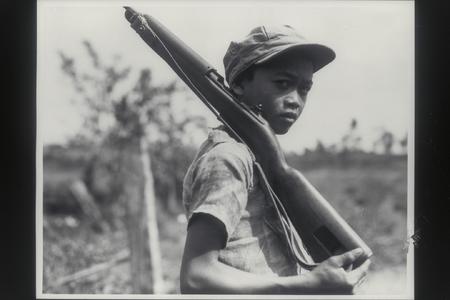 This is a photograph taken by Paul Jordan, a member of the Technicolor Government Services on November 25, 1944. The youth in the picture is Gerilino Bening, who was a 16-year old guerilla, attached to Company B of the Filipino 96th Infantry Regiment at Consuegra, Leyte in the Philippines. 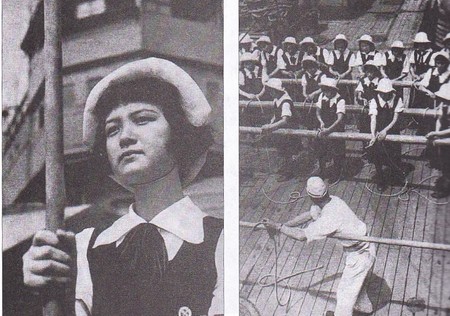 This photograph is from the October 6, 1943 edition of the Photographic Weekly Report (Shashin Shuho), which was a weekly pictorial journal published by the Japanese Cabinet Intelligence Department during the interwar years of 1938-1945. This magazine functioned as propaganda that the Japanese government used to shape public moral for the war. This photograph depicts high school girls receiving military training.

[Click the image for a translation of the image caption]

Comparing two opposite sides of the Pacific war, it becomes clear that World War II affected Filipino and Japanese children in three similar ways. Not all children on both sides always experienced the same level of indoctrination, starvation, or violence, but they were still affected by all three directly or indirectly. Violence and bombings worsened food insecurities as food stores were destroyed and trade and travel were disrupted caused civilians to starve. But starvation also wrought violence. As Japan began to starve, they squeezed their occupied countries in Asia for what little food they had. But this food that Japan stole, rarely made its way to Japanese civilians as much of it was lost in the depths of the Pacific. In the Philippines, Japanese soldiers as well as Filipino guerillas confiscated food from resident villages while raping their women. As for indoctrination, it fanned the flames of war. The Japanese youth who played soldier at the war’s start had become soldiers fighting abroad by the war’s end. For Japanese youth who resisted indoctrination and war, the punishment was beatings and starvation. Filipino youth were not reciprocal to Japanese indoctrination, but they also received the same punishments when they were unruly, and even when they were not.

Both Japanese and Filipino youth could not escape the effects of the war, illustrating that World War II in the Pacific was a total war.  In Japan and the Philippines, many children were directly involved in the war effort and at times even died a soldier’s death.

← Food Insecurity in the Philippines
Resources →