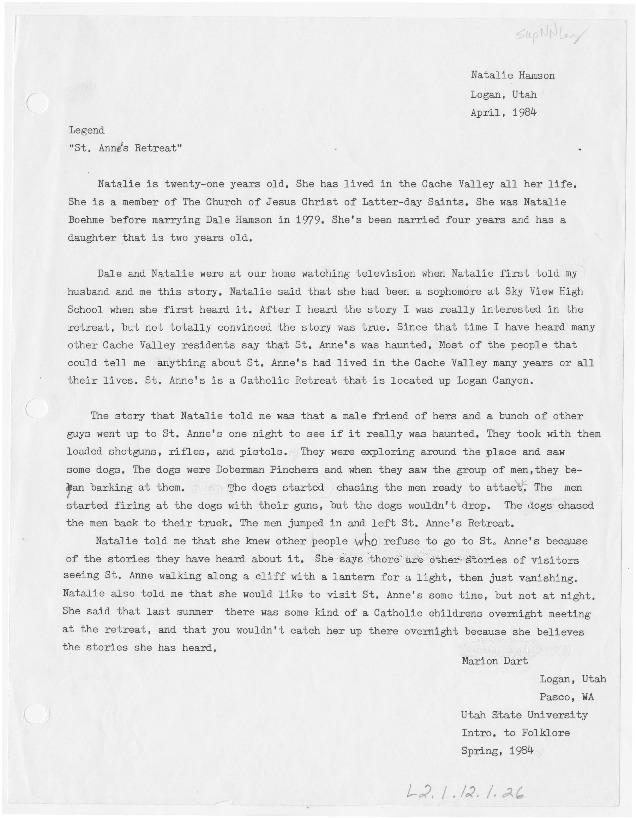 Natalie is twenty-one years old. She has lived in the Cache Valley all her life.
She is a member of The Church of Jesus Christ of Latter-day Saints. She was Natalie
Boehme before marrying Dale Hamson in 1979. She's been married four years and has a
daughter that is two years old.
Dale and Natalie were at our home watching television when Natalie first told my
husband and me this story. Natalie said that she had been a sophombre at Sky View High
School when she first heard it. After I heard the story I was really interested in the
retreat, but not totally convinced the story was true. Since that time I have heard many
other Cache Valley residents say that St. Anne's was haunted. Most of the people that
could tell me anything about St. Anne's had lived in the Cache Valley many years or all
their lives. St. Anne's is a Catholic Retreat that is located up Logan Canyon.
The story that Natalie told me was that a male friend of hers and a bunch of other
guys went up to St. Anne's one night to see if it really was haunted. They took with them
loaded shotguns, rifles, and pistols. They were exploring around the place and saw
some dogs. The dogs were Doberman Pinchers and when they saw the group of men,they be­,
an barking at them. ~he dogs started chasing the men ready to attact~ The men
started firing at the dogs with their guns, but the dogs wouldn't drop. The dogs· chased
the men back to their truck. The men jumped in and left St. Anne's Retreat.
Natalie told me that she knew other people who refuse to go to Sto Anne's because
of the stories they have heard about it. Shei;aY's ·there"are other's'tories of visitors
seeing St. Anne walking along a cliff with a lantern for a light, then just vanishing.
Natalie also told me that she would like to visit St. Anne's some time, but not at night.
She said that last summer there was some kind of a Catholic childrens overnight meeting
at the retreat, and that you wouldn't catch her up there overnight because she believes
the stories she has heard.
Marion Dart
Logan, Utah
Pasco, WA
Utah &tate University
Intro. to Folklore
Spring, 1984