Come Josephine in my flying machine

In the air she goes! There she goes!

Up, up, a little bit higher

Oh! My! The moon is on fire

Come Josephine in my flying machine

Going up, all on, Goodbye!

Imagine seeing an airplane for the first time when they were still fledgling machines, hardly more than kites with an engine strapped on. Songwriters Alfred Bryan and Fred Fisher capture the awe and wonder of early aviation in their song, “Come Josephine in My Flying Machine.” It is easy to tell from the line, “balance yourself like a bird on a beam,” that designs may have been a bit disconcerting, but they worked and they would only continue to fly higher. These flying machines offered a new world of excitement as people pondered the possibilities that such a technology might bring. “Airmindedness” is a term used to describe this enthusiasm for aviation and an interest in its development, as well embracing more than a two-dimensional perspective thanks to the elevation aircraft offered.[1] This term is reflective of the United States during the first half of the twentieth century as constant innovation in the field of aviation caused excitement and wonder to swell in the minds of the people and provided new trajectories, and Cache Valley proved to be no exception.[2] As aeroplanes began to make appearances in Utah, the people of Cache Valley clamored to bring the spectacle to local skies.[3] 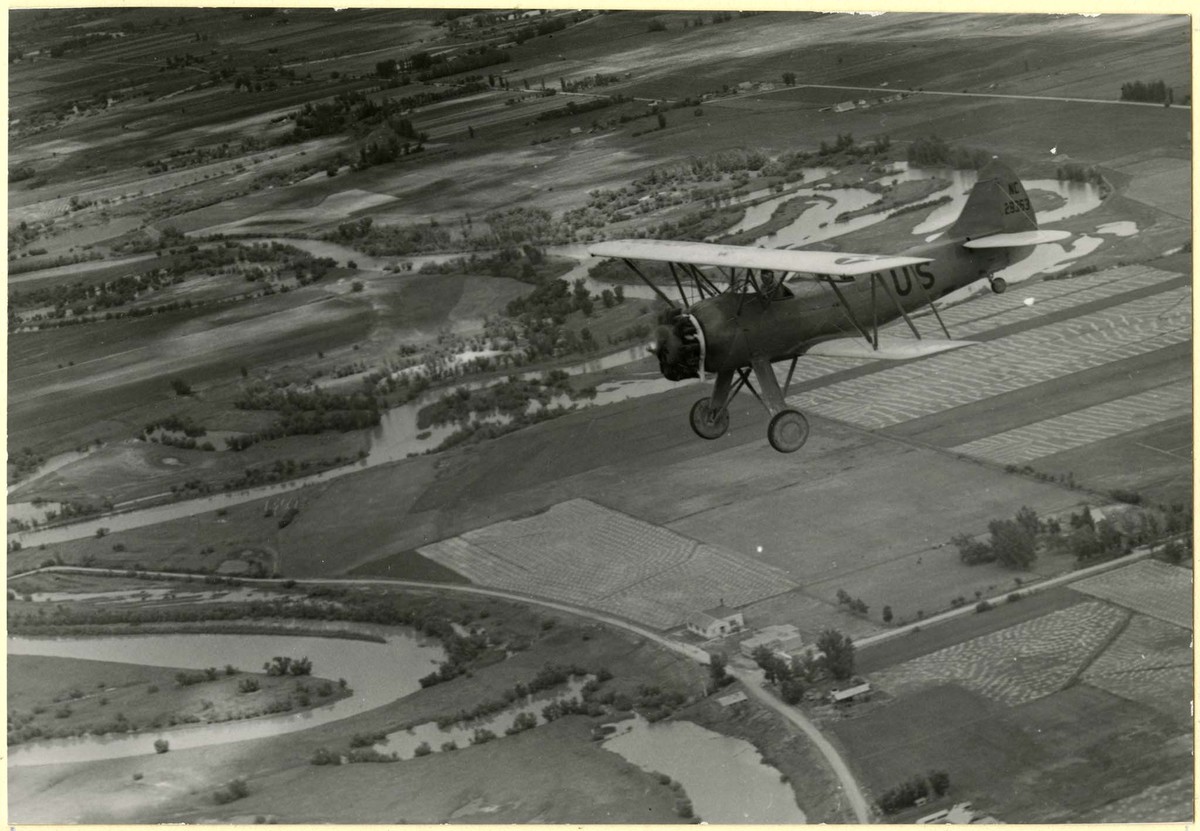 A military trainer in flight over Cache Valley.

This spirit of airmindedness drove the technological and practical innovations that occurred so quickly in the history of aviation. To begin with, flying machines achieved something man had long sought—flight. While some questioned the invention, others sought to develop the technology further to make it more than just a novelty, but rather a commodity. Warfare quickly took early aeroplane designs and turned them into tools with which to wage war, carrying out tasks such as observation, bombing, and pursuit during the First World War. When the fighting ceased, the question that plagued the United States Army Air Service was, “What now?” After months of intensive training in order to field pilots, crews, and mechanics overseas, the necessity for their specialized skills met an abrupt end. Some arrived in France only days before the armistice was signed, which (to their dismay) meant there was no action to become involved in.[4] Aviators were shipped home in the months following and discharged as large numbers of pilots were not needed in a postwar air force. Many hoped to retain the thrill of flying and avoid returning to the monotonous jobs they held prior to the war.

These aviators sought out cheap surplus planes like the abundant Curtiss JN-4 “Jenny” and strove to find their niche in the civilian world. Some began careers as barnstormers, touring the country and performing aerial exhibitions for awestruck spectators and igniting a passion for aviation in many. These aviators would provide demonstrations of the aerobatics their planes were capable of such as loops, dives, and spins. As stunts progressed, spectators viewed daredevils walking on wings and dangling from soaring aircraft. They also made money by selling flights to locals eager for a thrilling experience. The desire of these veterans to continue their involvement in aviation and to make a living from it quickly gave rise to commercial aviation in the United States, through their barnstorming adventures and others such as airmail and early passenger travel.

The creation of government subsidized airmail operations beginning in 1918 set the stage for future commercial opportunities, such as civilian travel, by making air transport economically sustainable.[5] Marked routes gradually appeared throughout the country, offering lights and directions to aviators flying the mail long distances. To accommodate this air traffic, aviation infrastructure such as airports became more common as well. In 1925, the Contract Air Mail Act alleviated the US Postal Service from flying the mail and opened various contract airmail routes to private bidders. The government subsidies that accompanied an airmail contract provided some aviation companies with the funds necessary to update their fleets and begin carrying passengers in addition to parcels. The realization that transporting passengers was a beneficial and viable service caused the commercial field of aviation to blossom.[6]

Despite the relative isolation of Cache Valley, the narrative of local aviation managed to follow the same overarching pattern, just at a slower pace. Driven by an airminded populace, Cache Valley developed its own aviation community and infrastructure for its own benefit. Early barnstormers came and established the need for an airport, which then allowed for increased commercial uses of aircraft. Though airmail did not come first in Cache Valley’s story, it still proved a critical asset for people who wanted the most out of this new and practical technology. Finally, though the community could not itself pull the resources needed to create something like an airline, it was a natural step to invite other airlines to service the valley. Aviation took a region enclosed by mountains and hills on all sides, largely shielded from the outside world, and shattered these barriers. Not only could people leave Cache Valley and fly nearly anywhere in the world in short order, but visitors could also come.

[3] The term “aeroplane” is used early on in the narrative to reflect the earliest common word for airplane.

[5] Tim Brady explores the development of post-World War I aviation in much detail. Brady is possibly the most vocal of the fact that the airline industry is “inseparably linked to the beginnings of airmail service in the United States.”; Tim Brady, The American Aviation Experience: A History (Carbondale, IL: Southern Illinois University Press, 2000), 125.