The shrill howl of a whistle as the train pulled into the Logan station announced the arrival of a new age in Cache Valley. On a wintry day, February 23, 1911, the first aeroplane reached Cache Valley, loaded on a train car. Its mere presence was exciting enough to the local people but more exciting was the knowledge that it would soon grace the skies overhead.

Back in January 1910, Louis Paulhan, a famous French aviator, had made Utah history as his rickety aircraft soared over Salt Lake City. A couple of large air meets held throughout Utah over the next year inspired Logan businessmen to bring this new technology to their own city in early 1911. Overwhelming costs prevented them from securing flyers from the Wright or Curtiss companies to demonstrate, so they settled for a Utah aviator named Clarence Walker. Walker struggled with multiple failed attempts to get airborne at an air meet in Salt Lake City when the Logan representatives approached him, and unsurprisingly, his price was much cheaper than that of other aviators. These failures, however, resulted in a day-after-day postponement of Logan’s First Air Meet as Walker still attempted to please his Salt Lake spectators and eventually overhauled his aircraft with a more powerful engine.[1]

Monday, February 27, marked the first day of the air meet and was followed by another day of flying demonstrations on the 29th. Slow to start due to more mechanical issues, Walker found himself facing increasing snow storms and ever more anxious spectators. At last Walker was ready, poised at the end of the football field at the Utah State Agricultural College (USAC). The plane rolled down the field, and to the dismay of all, got stuck in a snowbank. After repositioning the plane, Walker gained the needed speed and finally broke bonds with the earth. Walker was only about fifteen feet in the air when a strong gust rocked the plane, causing the pilot to shut down the engine and make a hard landing in the snow, damaging the aircraft. To the chagrin of the two thousand spectators present, the demonstration was done for the day. Unfortunately, though they expected the plane to be repaired and flown in a couple days, Clarence Walker fled town that night with the ticket money in order to avoid a potentially unruly crowd should he fail. Despite the outrage over losing their ticket money for a show that did not happen, Cache Valley retained a desire to witness and partake in aviation.[2] This airmindedness that took root would prove fruitful for Cache Valley and its residents by connecting them more fully to the outside world and providing new economic opportunities. 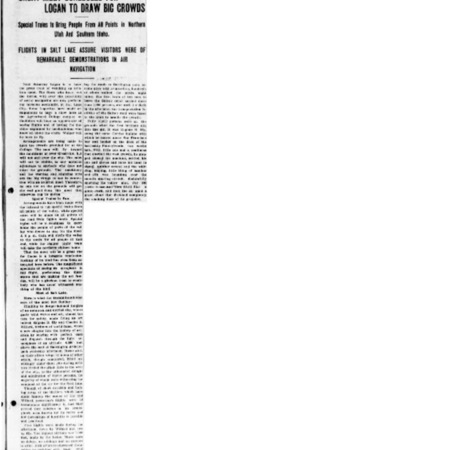 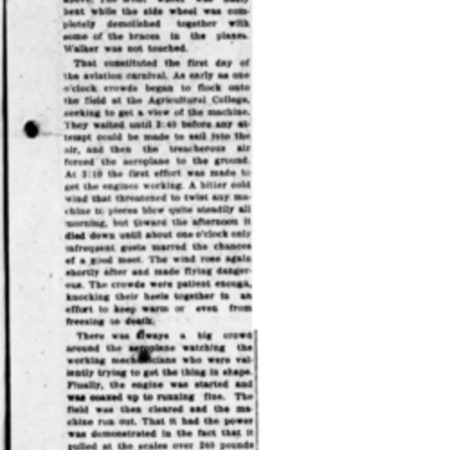 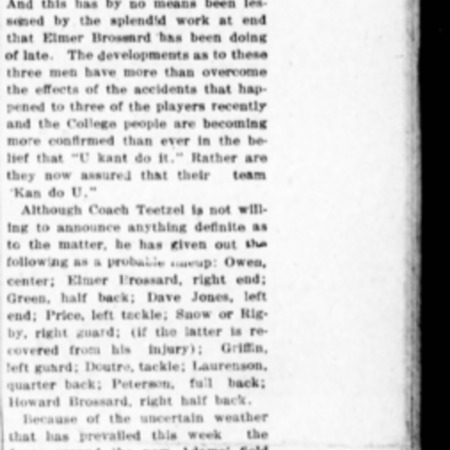 ← Aviation in America
Cache Valley Aviators and the Great War →