Postwar Aviation: The Rise of Commercial Service and General Aviation 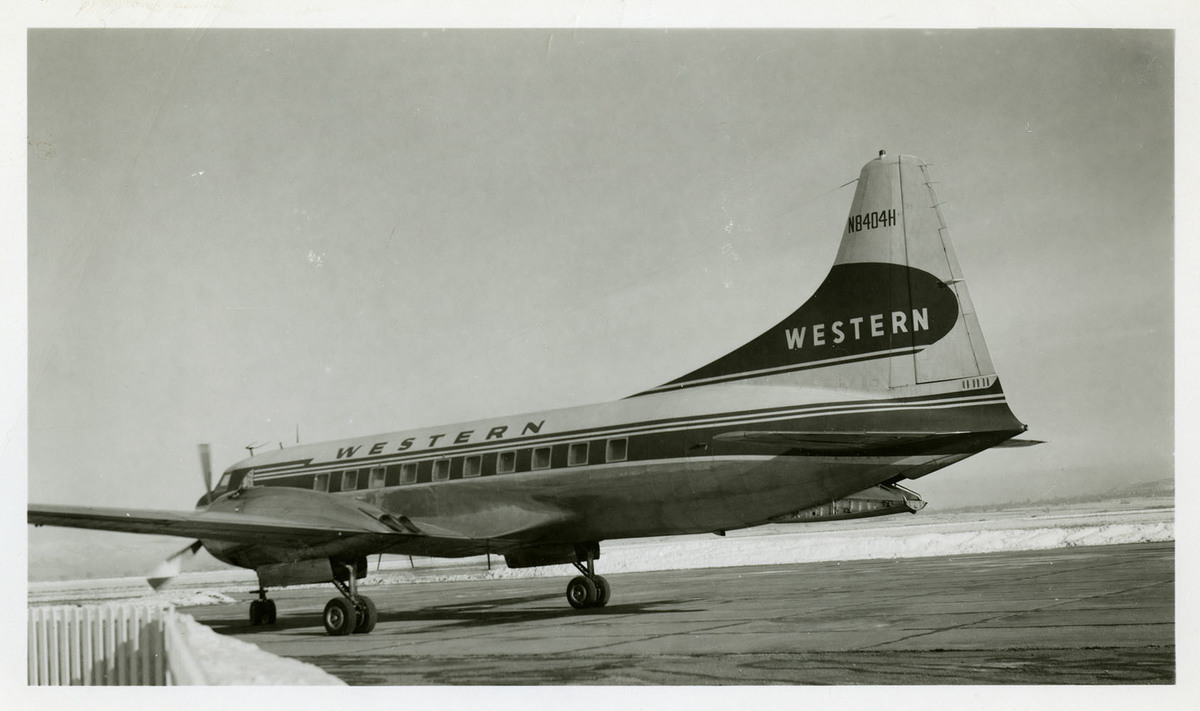 A Western Air Lines Convair CV-240 (a/c N8404H) as viewed from the terminal at the Logan-Cache Airport. Compared to the Piper J-3 Cubs that were all over the airport throughout World War II, a large, sleek airliner such as this was a proud sight for Cache Valley.

Prior to the United States entering the war (as early as August 1941), Western Air Express, among other airlines, had already expressed interest in creating a stop at the Logan-Cache Airport.[1] The prospect of regular airline stops and expanded commercial operations such as airmail and express services were exciting and highly desired. In early 1946, the franchise for the airport was indeed awarded to Western Air Express, and their inaugural flight took place on August 22, 1946, carrying both passengers and airmail.[2]

Western Airlines (as it later came to be called) opened a new world to the citizens of Cache Valley looking for a quicker connection to Salt Lake or other airports, for business as well as for those simply looking for leisure travel opportunities. Unfortunately, due to Western being a trunk line (an airline that primarily flies larger aircraft to and from major airport hubs), Cache Valley struggled to field enough passengers to justify such a service. As a result, by 1956, the Cache Chamber of Commerce applied for West Coast Airlines to include the Logan-Cache Airport in their flight plan. West Coast was a feeder line that flew much smaller aircraft along routes mainly connecting rural airports with larger airport hubs, making it a much better fit for Cache Valley.[3] With Western service ending soon afterward, feeder lines like West Coast serviced Cache Valley until airline travel ceased altogether in the 1970s. 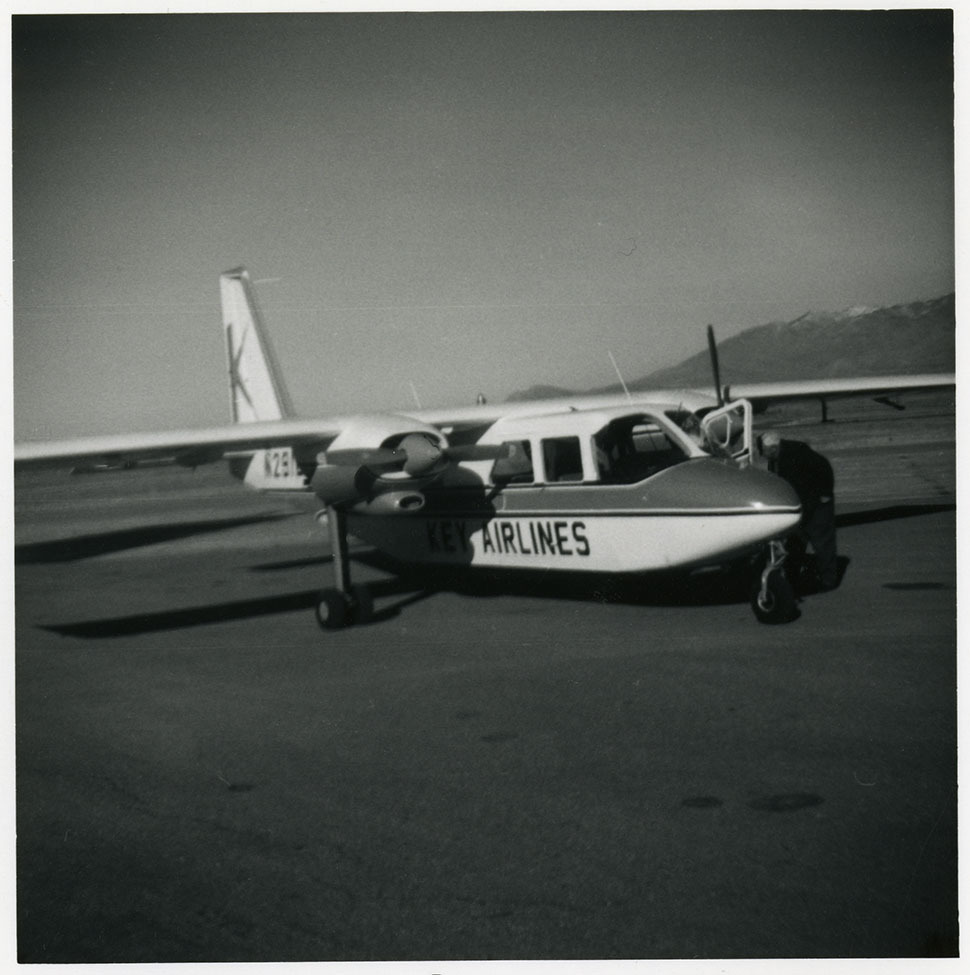 Unfortunately, by 1956, airline business was less than expected, so the Cache Chamber of Commerce sought other carriers that might be more advantageous to the airport. New airlines serviced Cache Valley with smaller, more cost-effective planes. Pictured is a Key Airlines Aero Commander with seating for up to four passengers.

Though passenger services faltered, the Cache Chamber of Commerce persisted in other efforts to bolster aviation. In 1949, a communication was sent to Brigadier General J. Wallace West, commander of the Utah National Guard, requesting that the Logan-Cache Airport be considered to host a National Guard fighter squadron. Unfortunately, Utah was not expecting any new Air National Guard units anytime soon.[4] Another considered venture was to host the Thalman Aircraft Company. Harry J. Thalman of Salt Lake City was looking for a building and fifty-thousand dollars in start-up funds to allow mass production of his new, four-seat T-4 aircraft. The chamber of commerce decided to pass on Thalman’s proposal.[5] Despite some proposals failing, the efforts were key indicators of the importance placed on aviation by the community.

There were also some unique operations to sustain and make the most of the Logan-Cache Airport. Starting around 1950, airport land was plowed and seeded with hay under the supervision of USAC agriculture instructors. Sale of the hay provided additional revenue to support airport operations. It is unclear how long this harvesting operation lasted.[6] West Coast Airlines and likely other airlines were involved in hauling shipments out of Cache Valley. One of the more lucrative shipments was mink furs. It was recorded that just in ten days, over a million dollars’ worth of mink furs were flown out of the airport.[7] While it is unclear if they were successful, other proposals included creating a go-kart track and a drag-racing strip at the airport. The Cache Chamber of Commerce was set on utilizing the airport to its fullest extent.

General aviation was plenty busy during this period, not only at the Logan-Cache Airport, but also at the city’s second airfield. The Hillcrest Airport was established in 1945 northeast of the USAC campus, where Hillcrest Elementary and the surrounding neighborhood now occupy. For over a decade, students trained and private pilots flew out of this location. By 1960, the city decided the encroaching suburbs and new meetinghouse of the Church of Jesus Christ of Latter-day Saints posed too great of hazards for aerial operations and moved the Hillcrest facilities to the Logan-Cache Airport.[8] 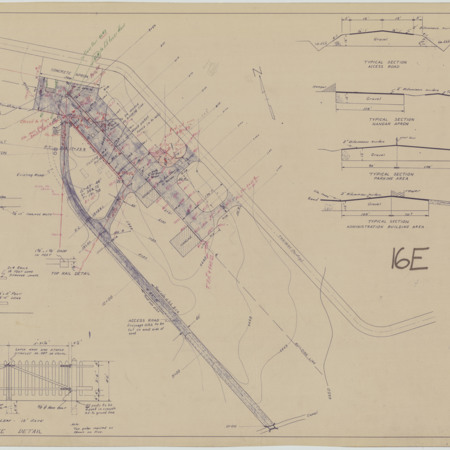 A layout sheet depicting surface and grading work to be done at the Logan-Cache Airport. The plan points out the Western Airlines terminal and even the design of the gate and fence to be used there. 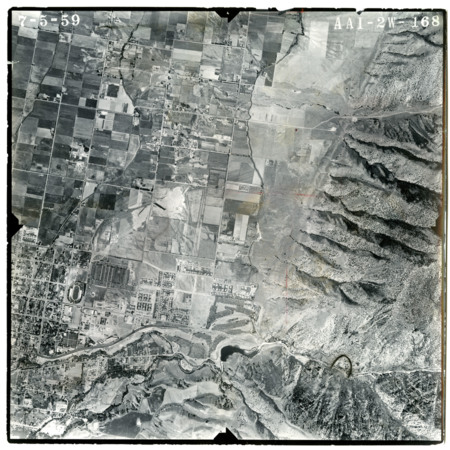 Many are unaware that Logan had two airports for decades. In the top left of the picture is Hillcrest Airport, constructed northeast of the USAC campus. Hillcrest Elementary School and the surrounding neighborhoods now stand where this small but well used airport once stood. Due to encroaching suburbs and to centralize aviation services, Hillcrest was closed in 1960 and its occupants were relocated to Logan-Cache Airport. 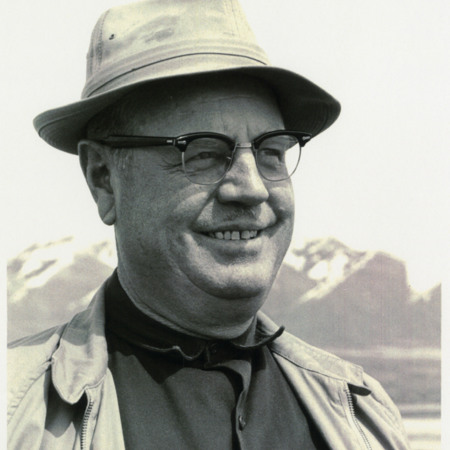 Floyd D. Hansen was a local aviation pioneer involved with the airport from the beginning, and in 1946, he was made manager of the Logan-Cache Airport. His service in this position continued until his retirement in 1972, during which time he fostered further growth in local aviation. 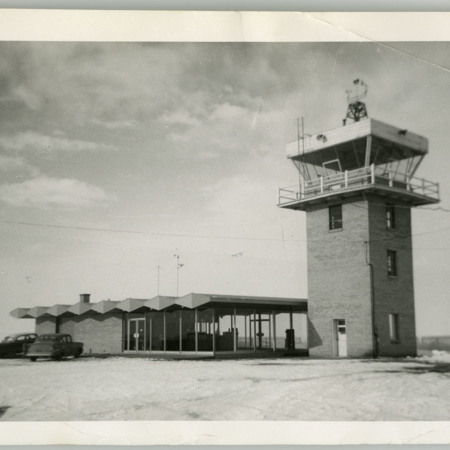 By the early 1960s, Logan-Cache Airport had a new administration building which also served as the terminal. The control tower was constructed in 1942 during the heyday of airport operations. 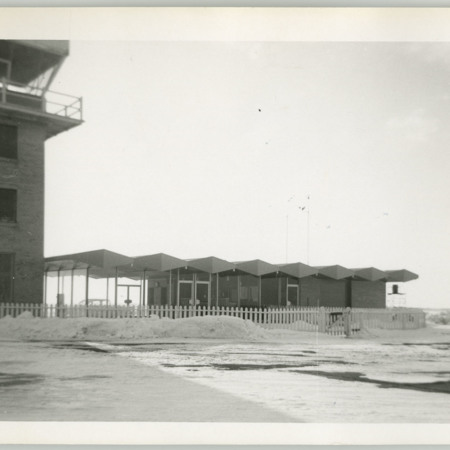 A view of the Logan-Cache Airport terminal from the tarmac. 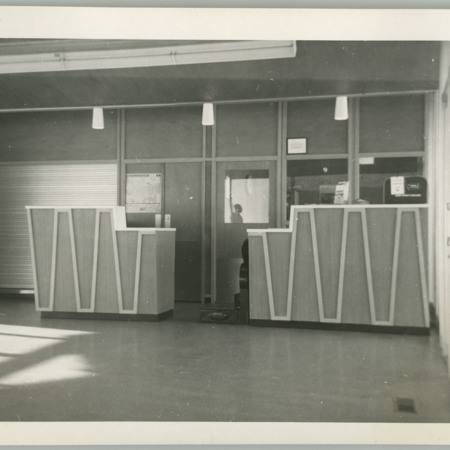 An interior image of the Logan-Cache Airport terminal. The presence of such a facility beckoned a new age of regular passenger service in and out of the valley. Unfortunately, scheduled services would falter soon after. 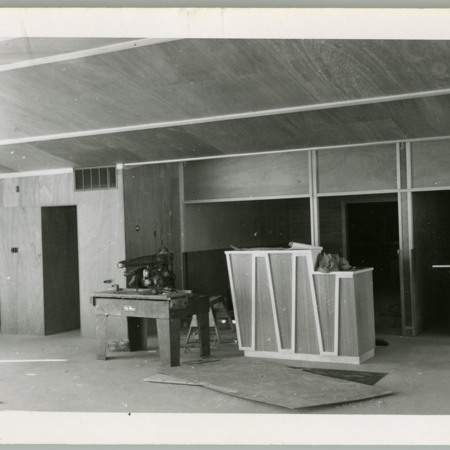 An interior image of the Logan-Cache Airport terminal. 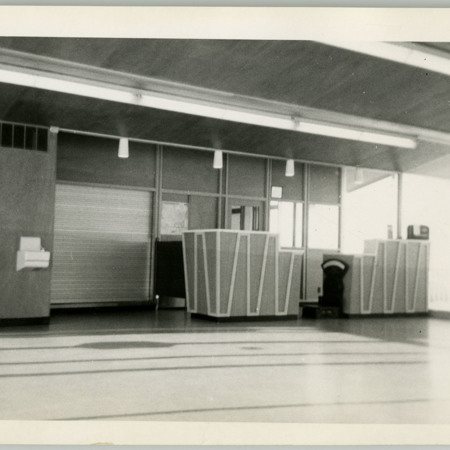 Another interior image of the Logan-Cache Airport terminal. 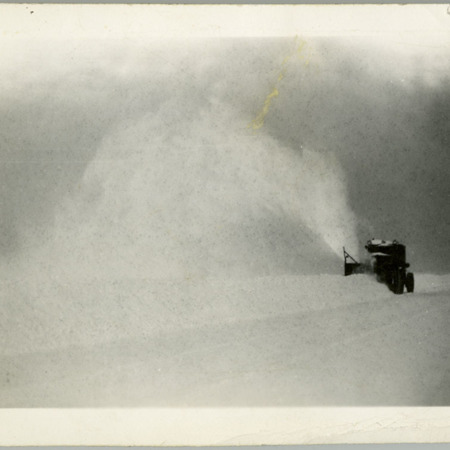 One thing Logan has plenty of during winter is snow. The Logan-Cache Airport maintained operations during such conditions by using snowblowers such as this to clear the tarmac. 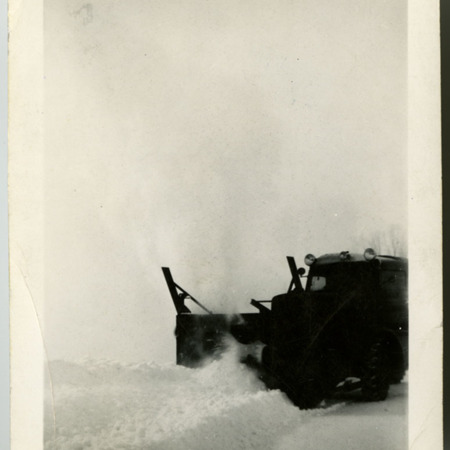 This is another snowblower used to clear the runways. 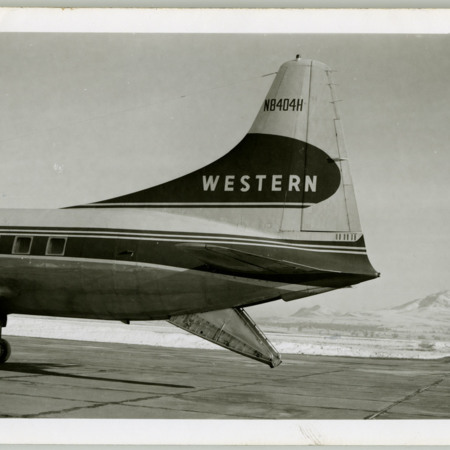 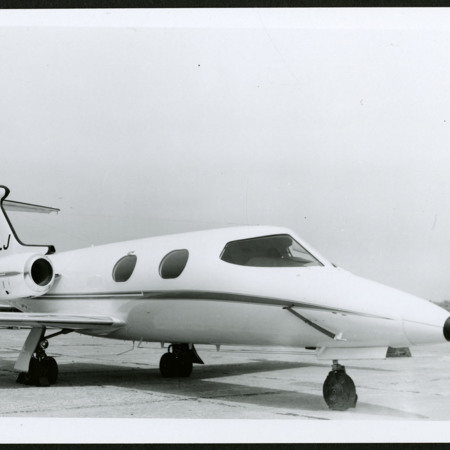 Though airline travel would taper off and eventually cease, booming industry in Cache Valley brought many more private jets, such as this Learjet (a/c N658LJ), to facilitate business operations. 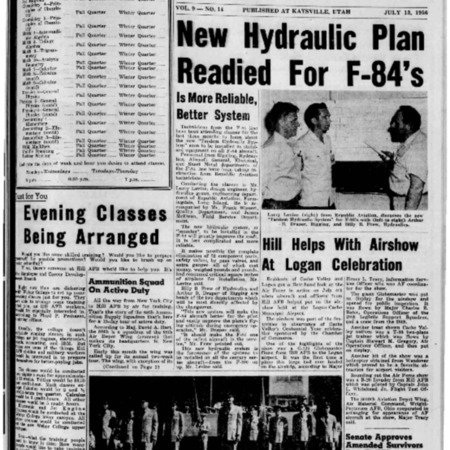 “Hill Helps with Airshow at Logan Celebration”—Hill Top Times, July 13, 1956. The people of Cache Valley continued to look to aviation with excitement. Events such as the centennial celebration were punctuated with high-flying aerobatics and impressive Air Force displays. 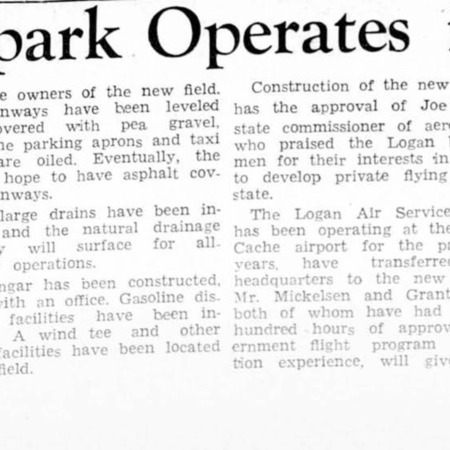