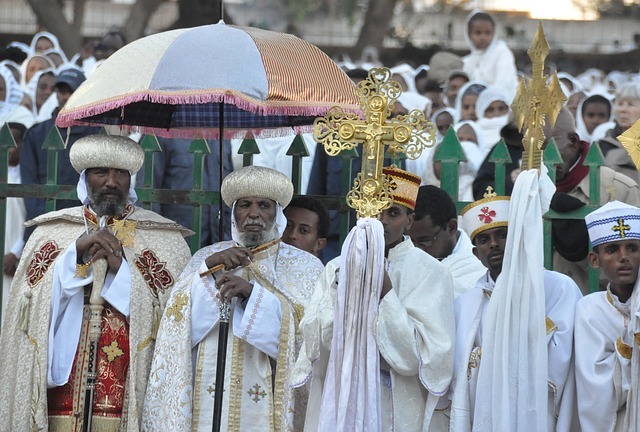 Eritrean Orthodox priests in ceremonial clothing gather for a religious procession in Asmara. [5]

Eritrea is made up of nine distinct ethnic groups, each of which has its own language. Of these, Tigrinya is the largest, and their language is the most widely spoken amongst all the groups. [1]

Christianity and Islam are the predominate faiths in Eritrea; the Eritrean Orthodox Tewahedo Church has the largest followers at nearly 58% of the population.[2][3][4] Eritreans claim to be equally tolerant towards Christianity and Islam, and the cultures of these two faiths often overlap in holy day recognition and language. Certain aspects of ritual foodways are also shared by both Muslims and Christians, such as the abstinence of pork. 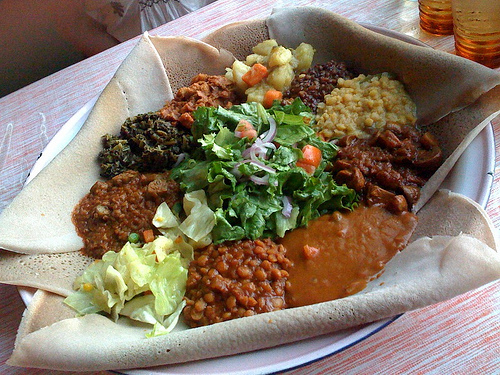 Because of its colonization by Italy, Eritrea embraces certain attributes of Italian culture. A large percentage of Christians identify as Roman Catholic, who celebrate the Feast of St. John, which derives from Italian tradition. Certain Italian words have also become common place, such as Ciao.

Eritrean cuisine is often spicy, consisting of stews made primarily of vegetables, lentils, goat, chicken, and lamb. The foundation of any Eritrean meal is injera, a flat bread made from a grain called taff or teff. Eritreans also brew their own alcohol, sowa, from fermented barley.

The Eritrean coffee ceremony makes up the heart of Eritrean society. Friends and family might gather in a home for several hours to socialize and drink coffee, which they brew in the traditional Eritrean manner. This process includes personally grinding coffee beans with a mortar and pestle, filling the bottom of small coffee cups with the beans, and pouring hot water to brew. Any cup may be refilled with water until the beans no longer release flavor. [7]

The major state holiday for Eritreans is their Independence Day, held on May 24th. Eritrean Christians also celebrate Christmas and Easter according to the Julian calendar, which holds that Christmas falls in the first part of January, while Easter is held a week later than Catholic and Protestant traditions. Both holidays consist of feasts, special church services, and fasting. Eritrean Muslims honor the traditional Eid holy days, and are often joined in celebrations with their Christian counterparts. [8]

← Why are they leaving?
Eritrean Voices in Cache Valley →