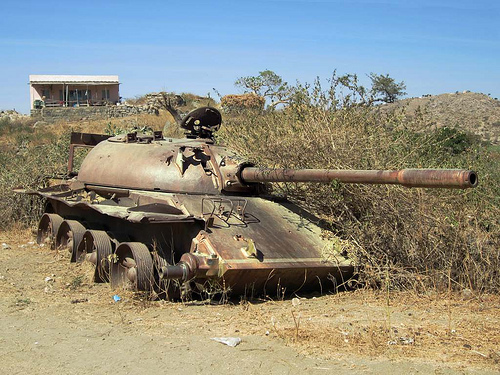 An abandoned tank from the war for Eritrean independence. [4]

Eritrea is a small country in the Horn of Africa. It was formerly an Italian colony passed over to British rule after WWII. The British controlled the region for ten years before handing it over to become the federal state of Ethiopia. As a result of this transition between governments and social injustices, Eritreans rallied together and began the Eritrean Liberation Movement in 1962 and declared war against Ethiopia which lasted until 1991 when the country gained independence. [1] Independent recognition by the United Nations was approved on May 28th, 1993. [2]

In 1997, Eritrea again entered into war with Ethiopia over the southern border. [3] This border has since been heavily militarized and guarded on both sides, putting thousands of people in danger, leaving few options for many who choose to flee their home countries. This resulted in the vast migration of refugees into camps in East and North Africa and into refugee programs in Europe, North America, and Australia.

← Eritrea
Why are they leaving? →