With so many social and political changes during this time, it was not surprising that Intermountain would feel the impact.

The 1970s and Concerns About Intermountain 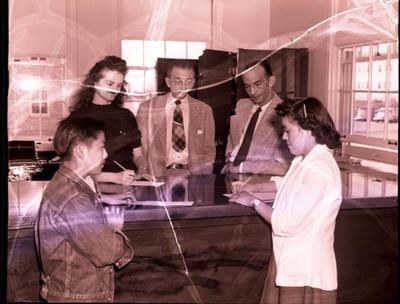 Intermountain students had accounts in the school bank, but the handling of these accounts was a cause of concern for some during the 1970s.

The American Indian Movement (AIM) held protests across the country to bring attention to the unfair treatment and portrayal of Native Americans in society and in the teaching of American history. Boarding schools in general came under renewed criticism, and Intermountain was no exception. AIM member Lehman Brightman visited Intermountain and raised a number of concerns. These included the unpalatable food, mixing of ages in dorms, harsh discipline for students who used alcohol (with punishments like having their heads shaved or being given the antipsychotic drug Thorazine), the way students’ money was managed, and the quality of education provided at Intermountain. Also of concern was the low percentage of Native teachers and low student achievement goals. Some students agreed with this assessment. Others disagreed and protested AIM’s findings. Either way, it was clear that change was coming to Intermountain.