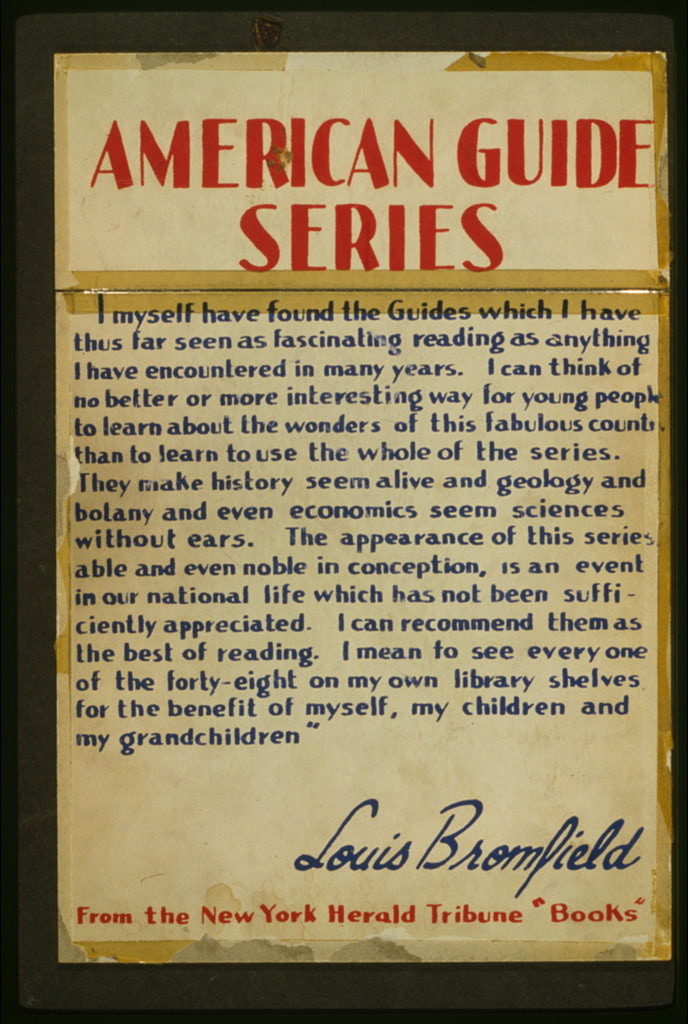 A poster from the Federal Writers’ Project advertising the American Guide Series featuring a quote from Louis Bromfield, a writer for the New York Times, 1941.

The American Guide Series was primarily a collection of 51 main guidebooks. There was a guide for each of the 48 states at the time and Washington, DC, as well as the territories of Alaska and Puerto Rico.[1] Hawaii, also a territory during the 1930s, was not included in the American Guide Series because it did not have a Federal Writers’ Project Division among its New Deal programs. A letter to state directors of the Federal Writers’ Project states that “the chief undertaking before the Writers’ Division . . . is the preparation of an encyclopedia publication entitled, ‘The American Guide.’ ”[2] In this same letter, it is stressed that the American Guides needed to be an accurate and thorough account of America’s history, landscape, and people to the point that they can be utilized as a historical textbook as well as guidebook.

The previous major United States guidebook—Baedeker’s Handbook for Travelers: United States, with Excursions to Mexico, Cuba, Puerto Rico, and Alaska—had been written in 1909 and did not adequately consider the use of automobiles that were becoming more prevalent in the 1930s.[3] The American Guide Series would include the recent additions to infrastructure and cover state landscapes in more depth. It would also discuss specific destinations as well as provide advice on the logistics of travel. These were new guides for a new national landscape. The guides would also provide an accurate portrayal of American history, culture, and people in each state.

In the letter sent out to state directors of the FWP regarding the American Guides project, it outlines different topics to include in each state guide such as plant and animal life, societies and associations, folk customs and folklore, transportation, natural resources, and many others with the intention of “[increasing] acquaintance with America by Americans.”[4] Additionally, the guides would convey the “true” America to its people. The national director of the FWP, Henry Alsberg, held the belief that the unique landscapes of different regions across America instigated the development of novel cultures in each region.[5] The culture of the United States was as diverse as its landscape. The thoroughness of the American guides allowed for each state to reemphasize what their “true” culture was by explaining their history and customs from scratch.[6] In her book, The WPA Guides: Mapping America, Christine Bold argues that the American Guide Series facilitated contemporary state cultures through clearing away previous conceptions of what American or state cultures might be and solidifying “true” American culture through facts and examples shown in the guides. This allowed for states to direct how they would be perceived by the rest of the nation. 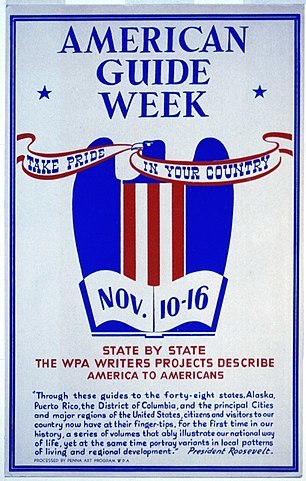 The image is of a New Deal poster advertising American Guide Week from November 10–16, 1941.

The American Guides were uniform in size, style, and layout—with the exception of the Idaho guide, which differed from standard federal policy due to disagreements between the federal and state offices. Each guide represented a piece of the larger collection just as each state is a piece of the larger nation. The guides followed a set format of three sections. The first section included essays explaining the state’s history, folklore, and other customs through the lens of a local resident in order to invest the reader in the subject.[7] The second section provided descriptive information about the states, including details about the wildlife, plant life, industry, and more. The third section—the majority of the guides’ content as well as their main purpose—was the tourism section. This section detailed the roads, transportation options, major cities and their attractions, natural and historical sites of relevance, and other points of interest to travelers in each state.[8] The guide tours promoted the natural landscape of each state—a contributing factor to the development of each state’s cultural identity. The showcasing of a location such as a historic battleground or a local lake, as well as the descriptions of a site’s significance, served to reflect how the landscape shaped state cultures.[9] 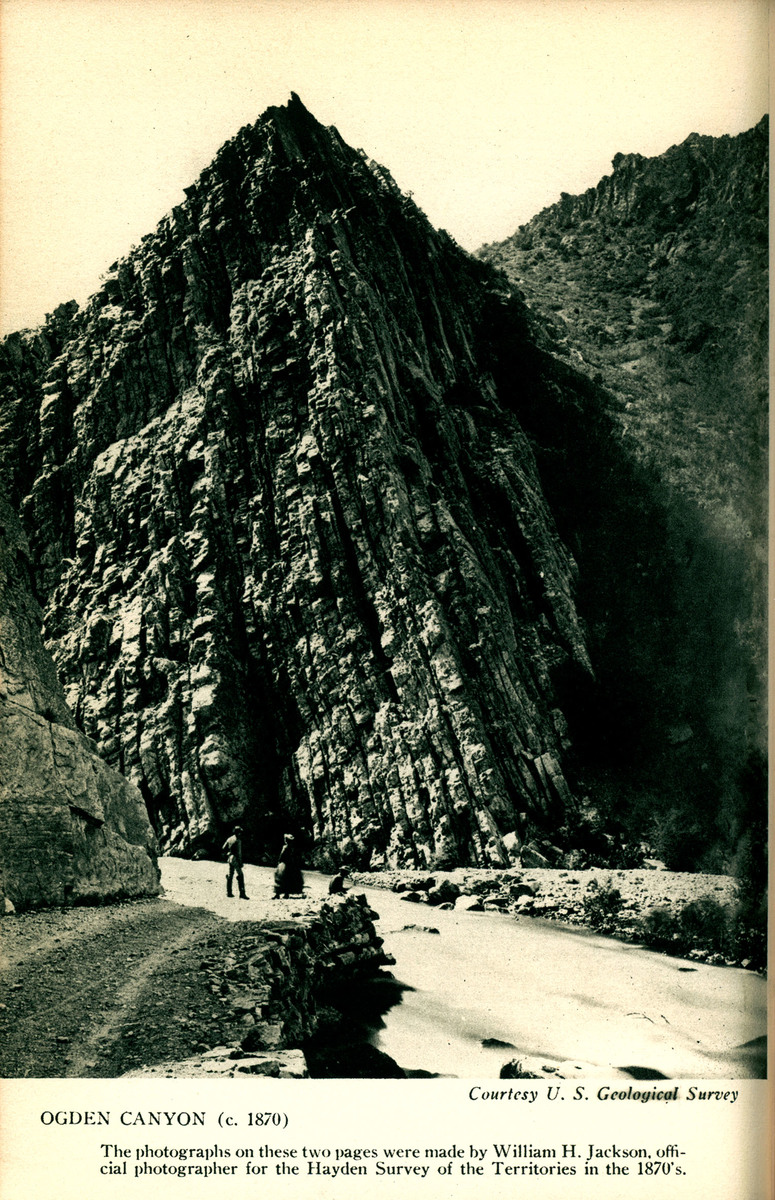 A photograph of Ogden Canyon from Utah: A Guide to the State, the Utah state guidebook from the American Guide Series created by the Utah Federal Writers’ Project during the New Deal.

The American Guides received mixed reactions from the public, though most opinions were favorable. Critics fell upon the guides with accusations of errors of fact or omission. Others viewed the guides apprehensively, perceiving controversial opinions in some of the essays from more radical authors.[10] It was far easier to detect radical commentary in written word than buildings or music. However, upon completion of the last guide in 1942, the US government declared November 10th through November 16th the national American Guides Week in celebration and promotion of the national accomplishment.[11] Even before American Guides Week, the guides had received praise from readers who considered them to be detailed, comprehensive, and engaging literature. Many critics considered the American Guide Series to be the most valuable product to come from the Federal Writers’ Project. Due to their meticulous attention to detail, many writers considered them a useful resource for researching settings for their writings. In his book, Travels with Charley, John Steinbeck wrote,

If there had been room . . . I would have packed the WPA Guides to the States, all forty-eight volumes of them. I have all of them, and some are very rare. . . . The complete set comprises the most comprehensive account of the United States ever got together, and nothing since has even approached it. It was compiled during the depression by the best writers in America.[12]

The American Guide Series was a successful contribution to American culture and literature. Their promotion of tourism in America bolstered the economy by encouraging travelers to go see the sights described. Familiarity with the nation and its history was considered a civic duty, and the guides communicated that history through their essays and tours while encouraging readers to personally experience the “true” America.[13] They also helped clarify what American and state culture were to a nation full of fear and doubts through the celebration of states’ diversity and natural landscape. This definition of what was “American” reassured US citizens in an exceptionally tumultuous time by giving them a means of coming together through a definitive shared culture.[14] The American Guide Series was a remarkable literary enterprise that is still studied and remembered fondly to this day. The Special Collections & Archives Unit of the Merrill-Cazier Library at Utah State University holds the complete first edition American Guide Series in their original covers as Book Collection 39.

← The Federal Writers’ Project
Idaho: A Guide in Word and Picture →