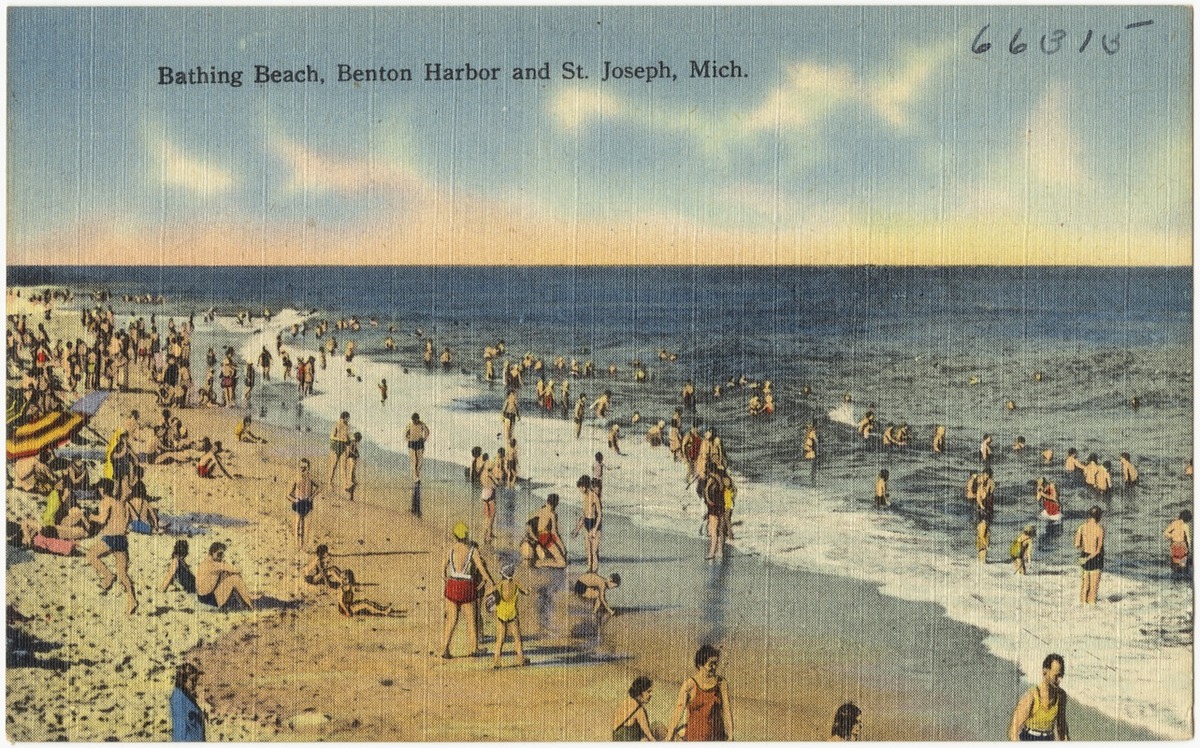 Tourism has been a feature in human civilization for thousands of years. From religious pilgrimages to exploration and trade, human curiosity and desire to see the wonders of the world has built and fueled this practice.[1] Initially, tourism had largely been restricted to only the wealthy, who could afford time-consuming and expensive journeys for personal motivations. However, in the 19th-century, technological improvements made traveling easier (better roads, railroads, and more common use of cars), and when combined with a middle-class with a larger disposable income, tourism expanded to include a much broader audience.[2] This meant that tourism advertising and attractions adapted to the wider audience as well. 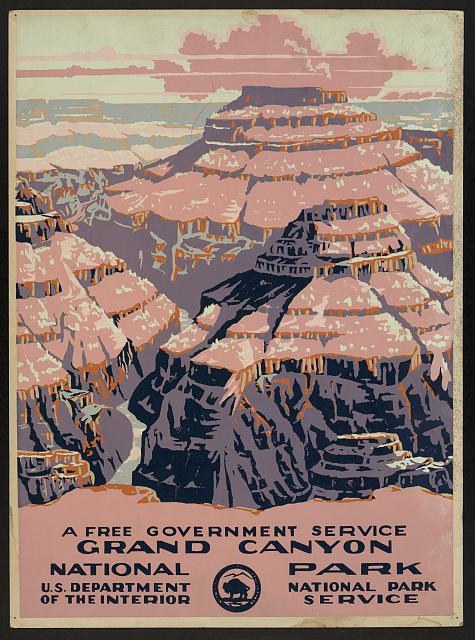 During the 19th century, America was still a relatively young country compared to its European rivals and lacked the same cultural history of artwork and literature that characterized many European nations. In place of this, Americans utilized their country’s vast and beautiful landscape as a defining characteristic of their national identity.[3] After the American Civil War, American tourism focused on a more national level, encouraging citizens to seek sites beyond their own regions.[4] It also shifted tourists’ attention to the West, what they viewed as a mysterious wilderness only partially tamed. Since the most efficient transportation to the West at the time was still the railroads, this allowed for the railroad companies to control the direction tourism in the West took.

Railroad companies and travel agencies during the 19th century took the initiative to develop guidebooks about the West. These books included many of the natural wonders and landscapes of the West. In addition to the natural scenic sites, the railroad companies increased the potential tourist locations to include places of national, political, and historical significance.[5] With an increased federal level of nationalism in post-Civil War America, the railroad companies and travel agencies claimed the patriotic element of tourism through experiencing and learning about the country by traveling to sites where history was made. This promoted US tourism as not only a pastime but as a civic duty. This would play into advertising campaigns by the Federal Writers’ Project to promote the American Guide Series, like the See America First campaign that was meant to tell the story of America in a truthful and entertaining manner.[6] 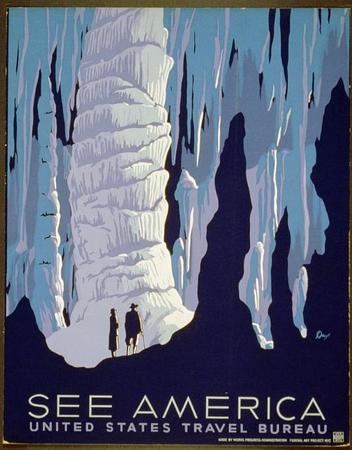 A poster created by the Federal Art Project for the United States Travel Bureau in 1939. It depicts two people exploring a cavern, promoting the New Deal See America campaign. [Click to enlarge] 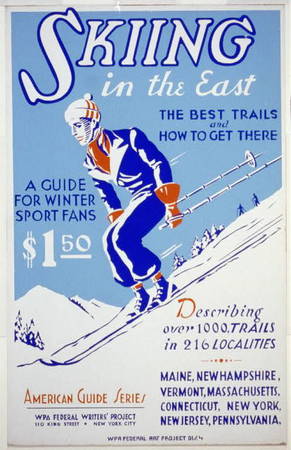 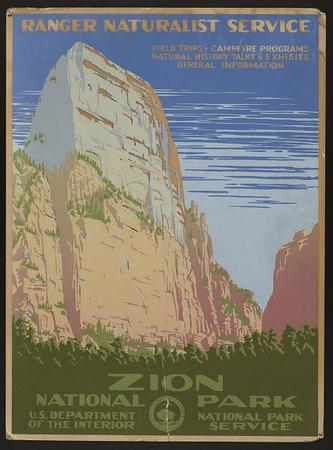 A poster created by the Department of the Interior, National Park Service in 1938. It depicts a forest from Zion National Park with text relaying information about the park. [Click to enlarge] 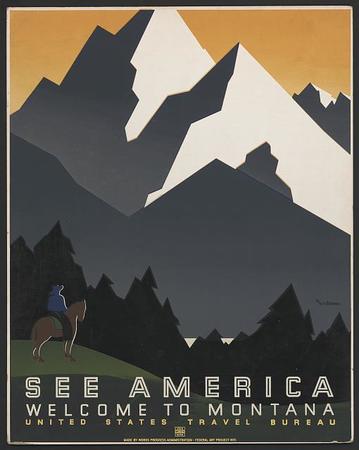 A poster created by the Federal Art Project for the United States Travel Bureau in 1939. It depicts a man on a horse in front of a mountain range with text advertising tourism in Montana. [Click to enlarge] 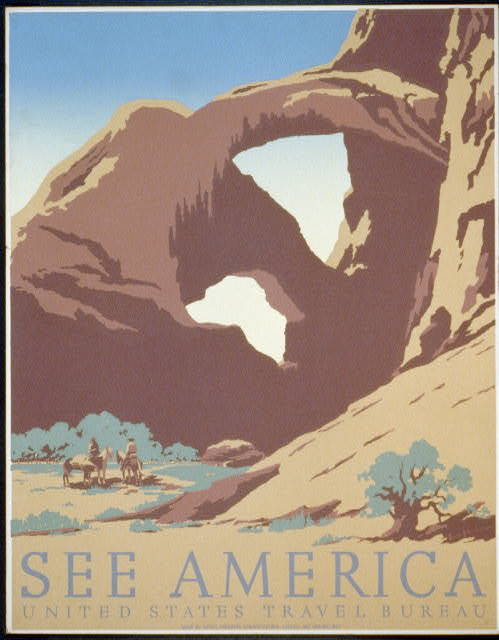 The American Guide Series was a significant influence on American tourism in the 20th century. The American Guides were made to provide relief work to unemployed writers, create a thorough account of American history and culture, and boost the American economy. All of these tasks were accomplished through tourist guidebooks. The American Guide Series promoted tourism as a method of creating a better sense of national unity. These guides were a medium to educate Americans about America.[7] This allowed for the American Guides to direct the future of Americans’ perception of their own nation. Using the renewed national interest in “rediscovering America,” the guides developed the concept of American exceptionalism through a celebration of extraordinary natural resources.[8] This was the idea that America had the potential to become a world superpower due to its rich natural resources. These resources were founded in the unique landscapes of America that created regional cultures that all contributed to the larger nation, strengthening America through diversity.[9]

With President Franklin Delano Roosevelt’s New Deal during the Great Depression, there were many projects that built up America’s infrastructure, such as the Works Progress Administration and the Civilian Conservation Corps. These projects created a new American landscape, filled with new highways, parks, and trails.[10] The most comprehensive guidebook to the United States prior to the American Guide Series had been written in 1909 and did not include practical information about the use of automobiles, still considered a novelty at that point, so the nation needed an updated guidebook.[11] This meant that another of the American Guide Series’ tasks was to show Americans how to navigate and understand the New Deal’s newly created landscape.

Tourism in the United States was the mechanism through which the American Guide Series proposed to benefit the nation. The guides improved the economy by encouraging citizens to discover and learn about their nation by traveling to sites of significance. They taught Americans about the nation by defining it through descriptions of its history and landscape, becoming a medium for national knowledge. Through the use of our varied national landscapes, providing an explanation for the variety of cultures found within the United States, and as the justification of American exceptionalism, the American Guides encouraged diversity as a source of national unity. The American Guide Series defined American culture and its progression through its rich informational base and its persuasive descriptions of the nation. 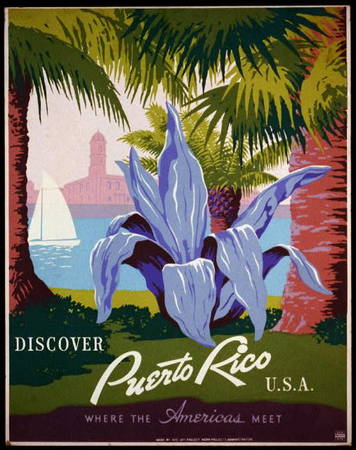 This image is of a poster created by the Federal Art Project in 1940. It depicts a scenic view with text promoting tourism in Puerto Rico. [Click to enlarge] 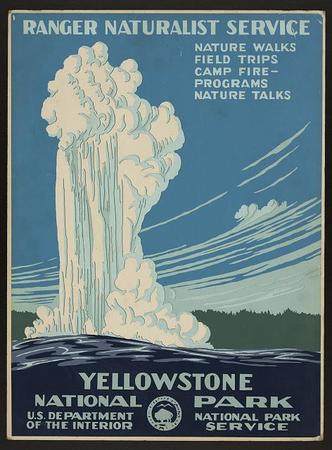 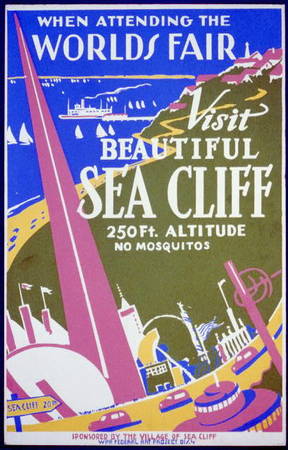 A poster created by the Federal Art Project for the World’s Fair c. 1938–1939. It depicts cars on a highway near a coastline with text encouraging visiting the World’s Fair as well as the sea cliff nearby. [Click to enlarge] 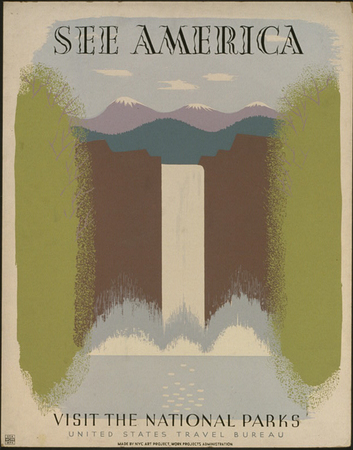 A poster created by the Federal Art Project for the United States Travel Bureau in 1940. It depicts a scene with a waterfall and text promoting tourism in national parks. [Click to enlarge]

← Utah: A Guide to the State
The Legacy of the American Guide Series →