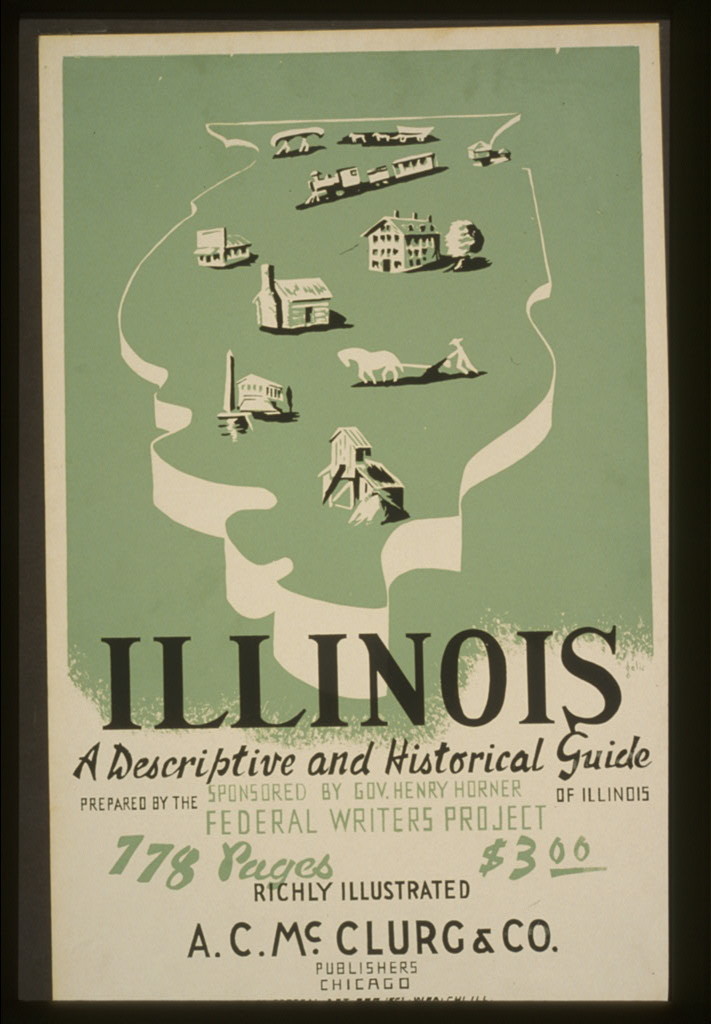 A poster advertising the Illinois state guidebook from the American Guide Series, Illinois: A Descriptive and Historical Guide, c. 1936–1940.

The Federal Writers’ Project (FWP) was a subdivision of Federal Project Number One under the Works Progress Administration (WPA).[1] The FWP put 6,686 academically skilled workers to work for the United States government. Directed by Henry G. Alsberg from 1935 to 1939, the program would go on to produce over 1,700 publications covering a vast variety of topics such as local and oral histories, health pamphlets, folklore collections, and more. In 1939, the FWP lost its federal funding and underwent a change in name and leadership, becoming the Federal Writers’ Program directed by John D. Newsom. From 1939 to 1943, when the federal government deemed the WPA unnecessary, the Federal Writers’ Program operated on state funding. During its 7½ year run, the FWP cost $25,685,756—20 percent of the total funding allotted to the WPA.[2]

The FWP had two main goals: to provide useful work for highly educated workers and to contribute notable literary works to American culture on behalf of the United States government.[3] This literature was meant to focus on the nation’s historical and cultural presence to that point.[4] Through this program, writers and other artists would be able to use their skills and promote the development of American culture and history productively. It also had the added benefit of keeping revolutionary-minded writers too busy to incite radical dissent. 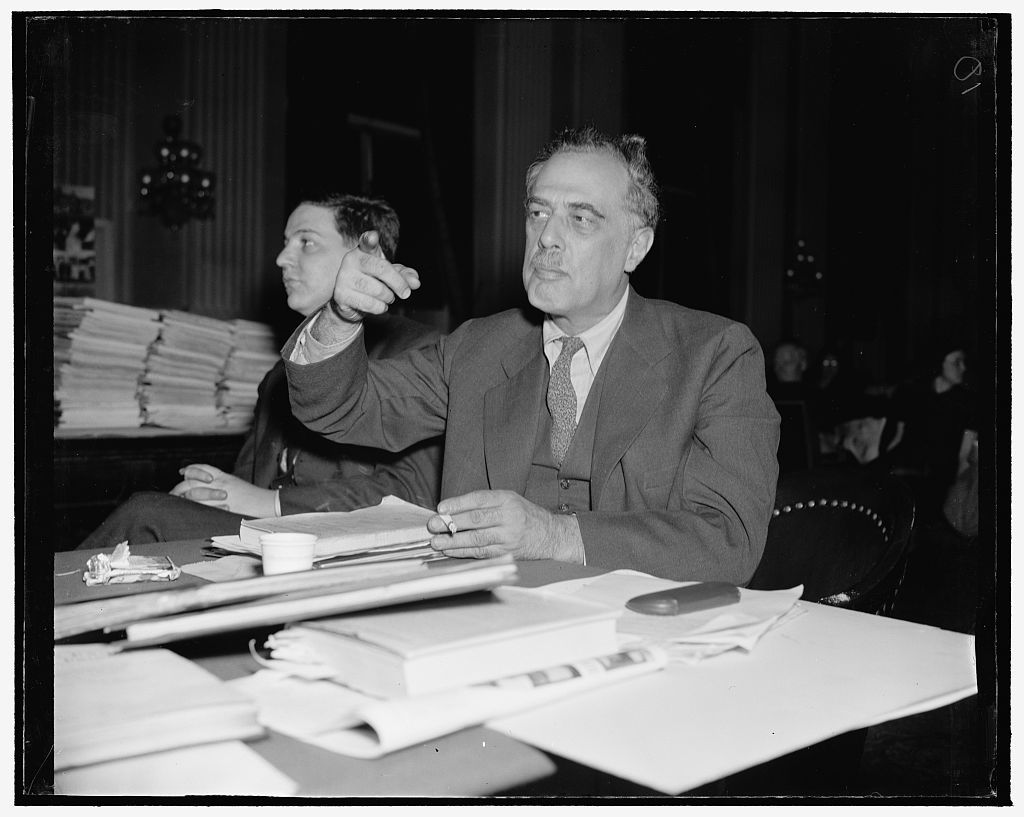 In Washington, DC, on December 6th, Henry Alsberg defended the Federal Writers’ Project in front of the investigating House Un-American Activities Committee. Alsberg acknowledged challenges with the New York FWP office due to communist activity but claimed that the problem had been addressed and operations were now doing well.

FWP employees were expected to work a minimum of 30 hours a week and had the potential to earn $80–$100 a month.[5] This was more than some New Deal workers and created resentment between program participants. What’s more, the FWP hired employees on a relief basis but with the added consideration of literary proficiency as well.[6] This furthered contention between the FWP employees and those of other New Deal programs. While the Federal Arts Program and the Federal Theatre Program were both well received by the public, the FWP garnered more criticism than praise. Most of the New Deal work relief programs had visible results to show the public with each day’s work. Many Americans took in the research done by members of the FWP and considered it mere “boondoggling,” a waste of time and taxpayers’ money.

Resentment toward FWP employees reached the point where researchers were met with open hostility when introducing themselves as members of the program. Criticism did not originate with just the public. Many artists identified the Federal Arts Programs as an attempt to pacify revolutionary-minded artists.[7] Those who bought into the movement were considered by some groups to be sellouts, compromising their beliefs and talents to secure the government for a paycheck. However, the FWP was not entirely without support. Some members of the artistic community considered the Federal Arts Programs as the salvation of an entire generation’s artists, concerned that a lack of money for patronage elsewhere would cripple the advancement of artistic culture in the United States. 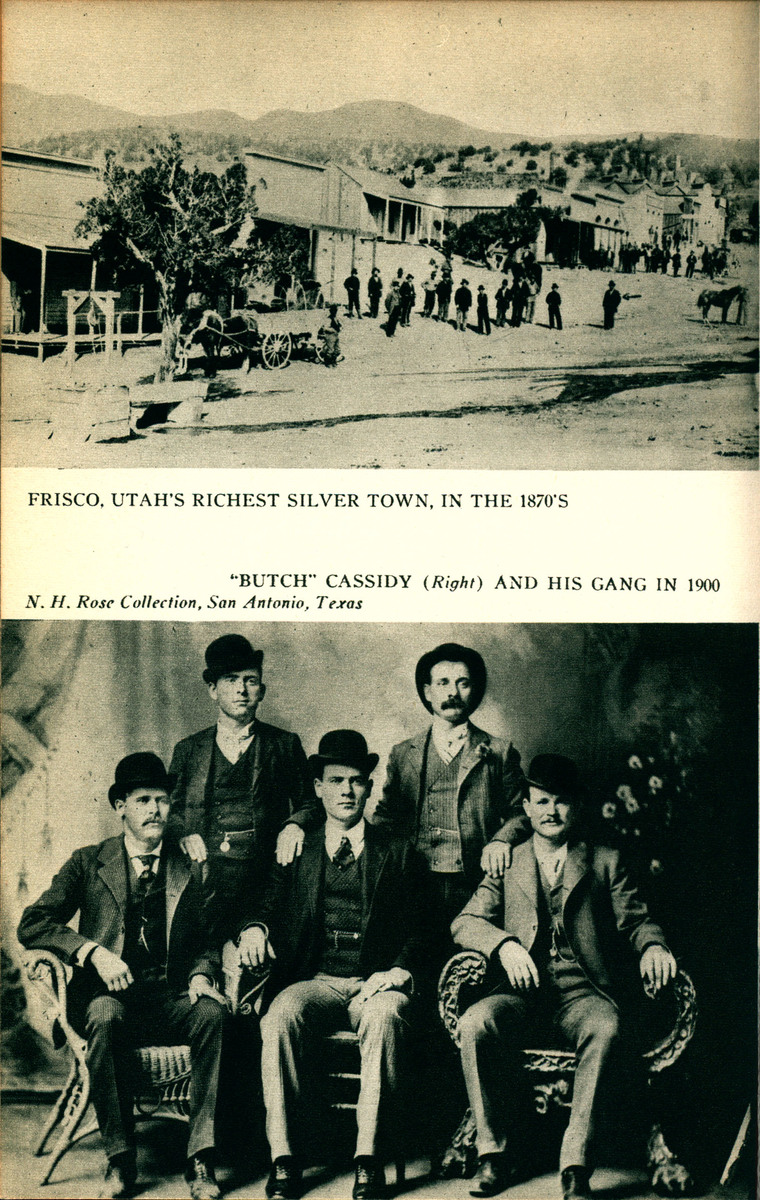 This is an image of photographs of Frisco, Utah, and Butch Cassidy and his gang from Utah: A Guide to the State, the Utah state guidebook from the American Guide Series created by the Utah Federal Writers’ Project during the New Deal.

The FWP did its part in contributing to American literature. Many of the works of the FWP served as a contrast to external literature that reflected the despondence of the nation’s public due to the hardship of the Great Depression. Criticism of the nation and its social, political, and economic systems were not uncommon and were depicted in the media of this period in a very melancholic style. The works of the FWP revolved mainly around what could and should be considered part of American culture and celebrating the nation’s diversity.[8] Slave Narratives: A Folk History of Slavery in the United States is the FWP’s most influential African American literary work.[9] Slaves Narratives is the collection of oral histories taken from former slaves in the American South. As a part of our history that had been neglected, this collection was part of the larger theme in the FWP works: “what defines American culture?”[10]

The American public was developing an interest in “Rediscovering America,” and the FWP facilitated this question with literary works that gave concrete examples of a diverse American culture. The FWP’s main goals were the primary examples of this: to collect folklore from across the nation and construct the American Guide Series.[11] The American Guide Series was meant to be the most comprehensive and accurate guide to America’s landscape and people to date. The FWP emphasized the necessity of accuracy and thoroughness in producing literary works. As such, the immense amount of research done in its 7½ years of operation was staggering. Jerre Mangione notes in his book, The Dream and the Deal: The Federal Writers’ Project, that after its dissolution in 1943, the FWP left 325 cubic feet worth of unpublished material in addition to its 1,700 published works.[12] The magnitude and influence of the Federal Writers’ Project have helped shape the United States in many ways, most notably in its impact upon American literature and its shaping of American culture.