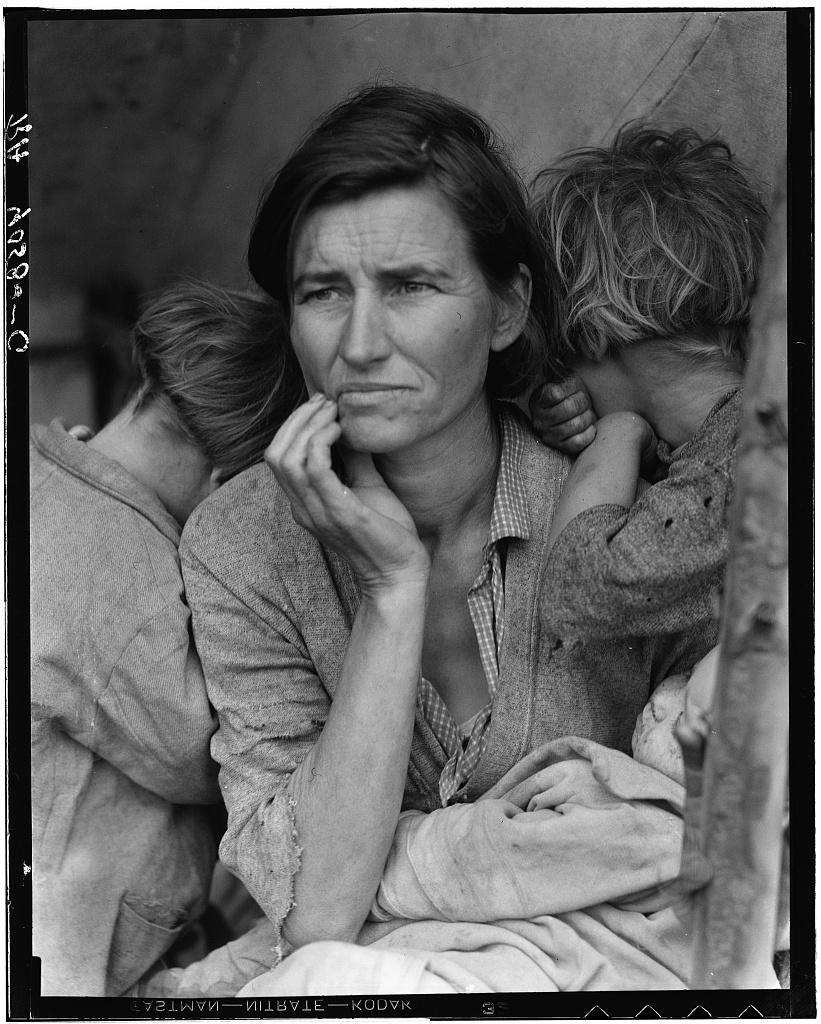 This image is a photograph called Destitute pea pickers in California. Mother of seven children. Age thirty-two. Nipomo, California by Dorothea Lange, also known as the Migrant Mother. The image shows Florence Thompson surrounded by her children during the Great Depression, 1936.

The Great Depression was an economic downturn that occurred worldwide from 1929 to 1939. The prosperity of the 1920s sparked unsustainable speculation in the stock market, resulting in the stock market crash of 1929. From September to November 1929, stocks depreciated in value by 33 percent. This would be the first blow to the global economy in the Great Depression and the instigating event that would accelerate the economic decline of the 1930s.

The stock market crash incited fear among the American public, with many households becoming increasingly frugal, further stagnating the economy. Decreasing consumerism prevented the effective sale of manufactured goods. Manufacturing companies slowed their production, decreasing potential wages for workers. This led to the banking panics of the 1930s, in which Americans who had lost faith in the economic system feared the banks’ ability to repay their depositors and rapidly withdrew their funds from banking institutions as a result. Unable to keep up with the withdrawals, 20 percent of United States banks were forced to close between 1930 and 1933.

In addition to the difficulties faced by financial institutions during the Great Depression, the Great Plains in North America experienced a significant drought in 1934. This drought allowed fierce windstorms to carry away the valuable topsoil that contained many of the necessary nutrients for crops. The subsequent crop failures caused 2.5 million Americans to migrate west in search of better livelihoods, many finding their way to California. The Great Plains, what was once the breadbasket of America, was now the Dust Bowl. 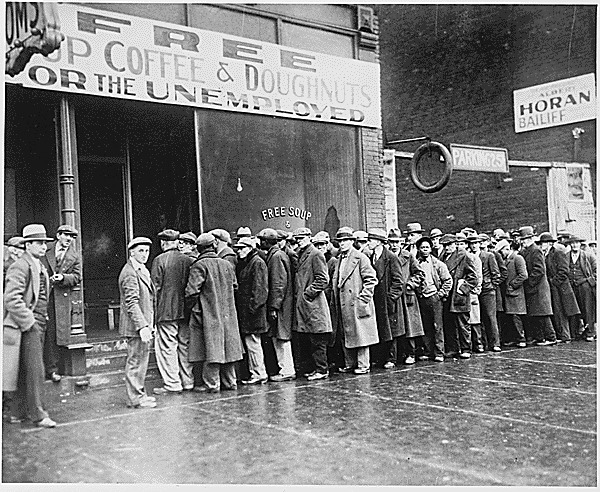 A photograph of unemployed men lined up for free coffee in Chicago during the Great Depression, 1931.

With 25 percent of the industrial world’s laborers unemployed and a stagnant economy, United States citizens felt immense fear in their day-to-day lives. This fear created a cultural change in the nation. Americans who did not know where their next meal would come from were living off breadlines and soup kitchens. On top of a declining birth rate, children of the Great Depression were forced to grow up quickly and find work to aid their families. More women entered the workforce, while men felt the emotional crisis of having their identities as the family’s source of income fall away as they searched for jobs that were not available.

The sense of distrust of financial institutions, acceptance of hardship, and emotional strain that emerged in the 1930s would leave a significant impact on American culture, media, and literature that is still felt and studied today. Only with time, the United States government’s departure from the gold standard, the increased production from military industrialism during World War II, and economic policies enacted as part of President Franklin Delano Roosevelt’s New Deal would the American economy finally recover from the Great Depression.

The New Deal and the Works Progress Administration →