Idaho: A Guide in Word and Picture 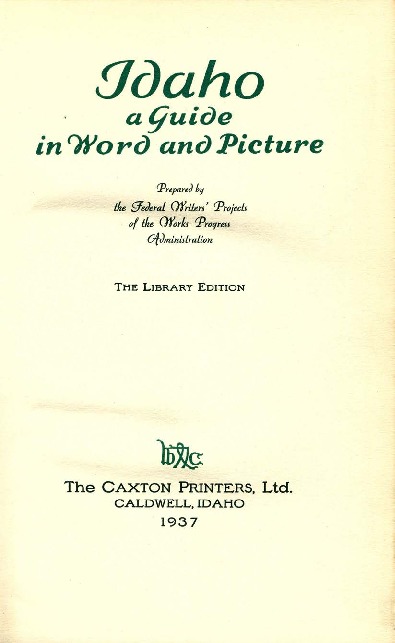 The title page from Idaho: A Guide in Word and Picture, 1937.

Idaho: A Guide in Word and Picture is the Idaho state guidebook in the American Guide Series produced by the Federal Writers’ Project (FWP). The Idaho guide was the first guide completed, published in 1937. Idaho Federal Writers’ Project employees compiled information put into the guide, but Vardis Fisher, the state director, wrote most of the guide. Vardis Fisher, a native Idahoan, was recommended to be the Idaho state director of the FWP by a friend and former colleague, Harold Merriam, who worked as the state director of the Montana FWP.[1] Fisher received his PhD in English from the University of Chicago after attending the University of Utah.[2] He worked as a teacher at the University of Utah as well as New York State University, an author, and eventually the director of the Idaho Federal Writers’ Project. A prolific author, Fisher wrote or edited 36 books over the course of his career along with several smaller publications. Out of the 405 pages of the first edition of Idaho, Fisher wrote 374 within ten months.[3] This was a testament to Fisher’s dedication to use the Idaho guide as a means of bringing Idaho to the forefront of national attention and to dispel any misconceptions or stereotypes about Idaho. He described it as his attempt to “bring honor to this small segment of a nationwide boondoggle.”[4]

Vardis Fisher saw his placement as the state director of the Idaho Federal Writers’ Project and their task of writing a comprehensive guidebook to the state of Idaho as an opportunity to redefine Idaho’s place in the nation. The beginning essay of the Idaho guide wastes no time addressing stereotypes about the Western states. Fisher condemns the perception of Western states as the wild frontier land that Americans saw in what he called, “the gaudy imbecilities of newsstand pulp magazines.”[5] He claimed that the dramatized characters and settings found in dime novels of the time would be out of place in the real West, calling them, “shoddy sawdust counterfeits.” Fisher wanted to tell the true story behind the people of Idaho and its settlement. With this history, Fisher and the Idaho guide developed a definition of what the “true west” was and what it looked like in their day and age.[6] He used Idaho as a representation of the West, and this could be considered appropriate due to the variety of regions and landscapes that make up Idaho. Idaho is an amalgamation of many diverse regions, seemingly comprised of the leftover areas of wilderness that didn’t fall into the boundaries of surrounding states, making the state very difficult to place into larger regional definitions.[7] The diversity of its geography was reflected in the customs and people of Idaho, and Fisher was determined to accurately introduce the rest of the country to this unique state. 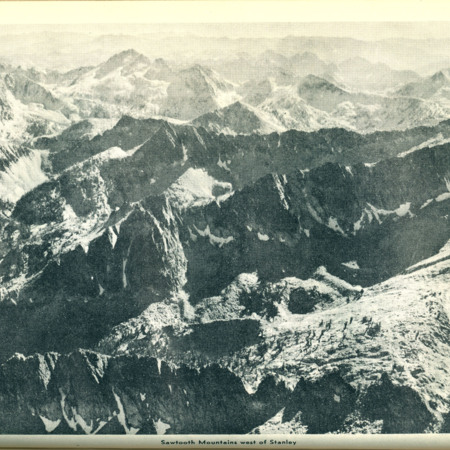 An image of the Sawtooth Mountains in Idaho from Idaho: A Guide in Word and Picture, 1937. [Click to enlarge] 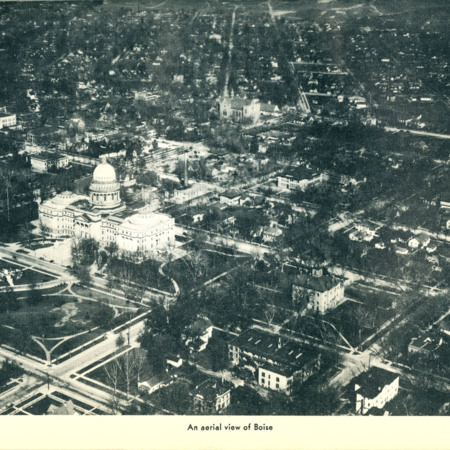 An image of an aerial view of Boise, Idaho, from Idaho: A Guide in Word and Picture, 1937. [Click to enlarge] 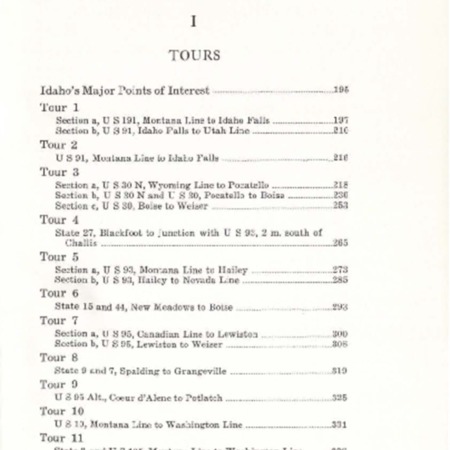 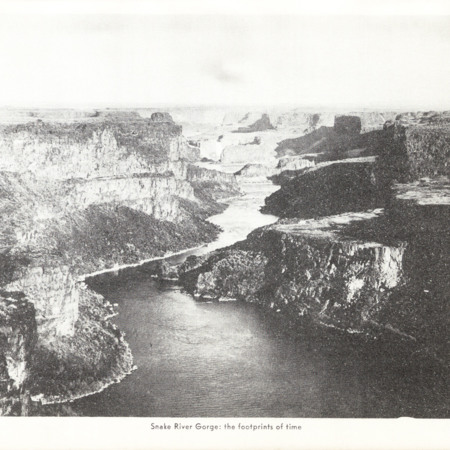 A picture of Snake River Gorge in Idaho from Idaho: A Guide in Word and Picture, 1937. [Click to enlarge] 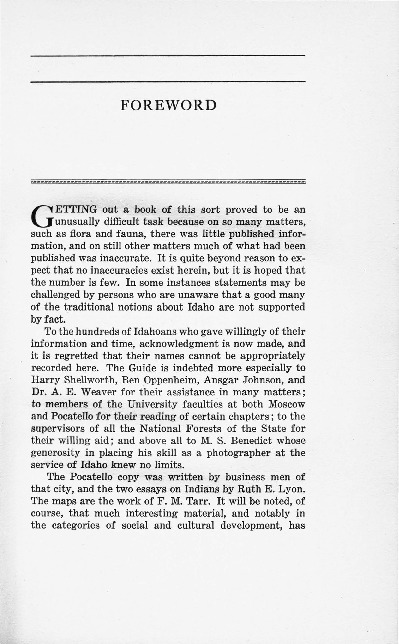 Page 7 from Idaho: A Guide in Word and Picture (the Idaho State guidebook from the American Guide Series created by the Idaho Federal Writers’ Project during the New Deal) in which Vardis Fisher acknowledges some of the difficulties faced in the creation of the guide as well as individuals who contributed, 1937.

The Idaho guide met difficulties on its path to publication, mainly from the national headquarters of the Federal Writers’ Project. When Henry G. Alsberg, the national director of the FWP, and the rest of the FWP Washington, DC, staff first laid the plans for the American Guide Series, they had always intended launch with the publication of one of the more prominent states, or even more preferably, Washington, DC, itself.[8] It was unfortunate that their choice of state directors would serve to foil their plan, mainly because Vardis Fisher had the same intention for the Idaho guide. Fisher strove to finish a high-quality guide of the state of Idaho before any other guidebooks made it to the press despite contradictory instructions, objectionable formatting, and outright sabotage from the national office.[9]

One of Fisher’s main complaints with the FWP instructions was the format of the tours section. The Washington office had decided that the state tours would all be organized in the same format, covering each state from north to south as well as east to west.[10] Fisher’s contention with this plan stemmed from the fact that most of the travelers that passed through Idaho came up from the south and made their way north. He argued that the Idaho guide staff should be allowed to design the tours in accordance with the regular travel paths of the state.

The Washington office disapproved despite Fisher’s rationale, so Fisher ignored them and organized the Idaho tours as he saw fit. Washington also took issue with the race between Idaho and Washington, DC, to be the first guide published. When Fisher first completed the guide, they attempted to stall the Idaho guide by demanding a copious amount of editing to be completed before the FWP would allow the guide to be submitted to their publisher.[11] Fisher’s response was to find a local printer and publish the guide without Washington’s approval. Washington sent out the assistant director of the FWP to stop Fisher from publishing the guide. 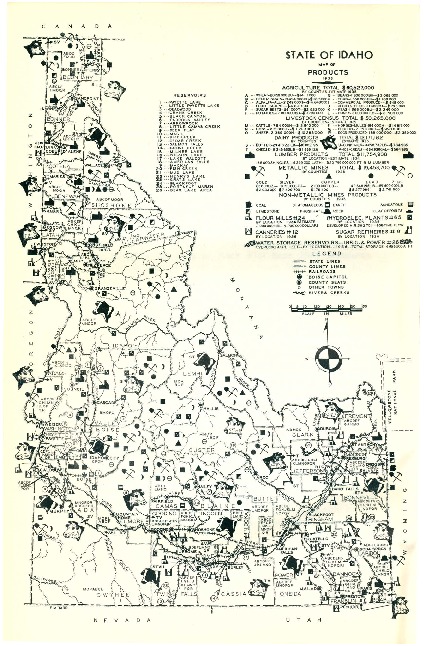 A map of Idaho state products from Idaho: A Guide in Word and Picture, 1937. [Click to enlarge]

In an interview reflecting on the publication of the Idaho guide Fisher stated:

I was determined, to get the Idaho guide out first. And, of course I did. Became a national—something of a national sensation. They tried to—the Washington Office tried to kill—stop the Idaho guide. They didn’t want it published because it’d be such an embarrassment to all the big states that had so much more money in their projects and such huge staffs. . . . So they sent a man out from Washington. They called me long distance several times and said, “You must not go ahead. . . . We’ll send a man out to stop you.” And they did send the assistant director . . . he came out to stop us from publishing the book. We got him drunk by—we took him to Gibson’s home and got him drunk, and I put him on the train and sent him back to Washington, and we went [ahead] and published the guide.[12]

Idaho: A Guide in Word and Picture was published in January of 1937 and was met with national praise.[13] The Idaho state guide left a legacy in the American Guide Series as the first guide published and the only guide to deviate in format and trim size. The Idaho guide managed to bring national attention to Idaho and bolster the economy through tourism. Through its promotion of the landscape, people, and history of Idaho, the Idaho guide reshaped the national perception of Idaho from a setting in a cheesy dime novel to a place of rugged landscapes and rich customs. In doing so, Idaho: A Guide in Word and Picture chose the direction of its cultural development through redefining itself.

← The American Guide Series
Utah: A Guide to the State →