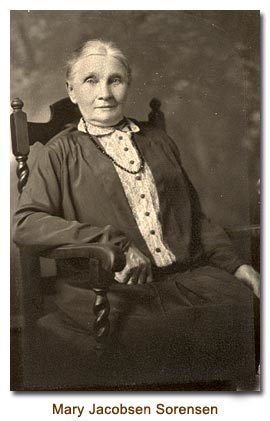 Mary Jacobsen Sorensen was born in the town of Vemmelev, near Slagelse, Sorø Amt, Denmark, on May18, 1850. Her father’s name was Jacob Christensen and her mother’s was Bertha Hansen. Her father was a farmer and Mary and her brother, Soren, grew up in a wonderful environment. However, in time their lives were changed. On October 20, 1851, her father died at the early age of twenty-nine. Her mother was left with two small children: Mary was six months old and Soren was three years old. Her mother found it extremely demanding to take care of the farm and the children. But within two years of her husband’s death, she found another husband who proved to be a good father to the children and never made any distinction between them and those who came from the second marriage. Christian Poulsen was said to have been a man of devotion and integrity, and he and Bertha sold their large farm when they embraced the teachings of the Church of Jesus Christ of Latter-day Saints in 1861 and immigrated to Salt Lake City in 1862.

The journey across the Atlantic Ocean was said to have been a very hard and stormy one. They were on the water for eleven weeks sailing in a vessel. During the course of their journey at sea, the water became stagnant and cholera broke out. Many lost their families. Christian Poulsen saved his family by paying the cook for boiled water. None of them died. They came to Providence, Cache Valley, Utah, in the fall of 1862. They spent much of their means helping poor Mormons to emigrate. Mary claimed to have walked every step of the way across the plains from Omaha, Nebraska, to Salt Lake City, Utah. They spent two years in the old Providence Fort and passed through many adversities. Mary labored very earnestly at home for a number of years, supporting the family. Though only eleven years of age, she took charge of the entire family during the year her mother, Bertha, was sick.

In 1869, she married Isaac Sorensen of Mendon, Utah. Mary made her home there and soon became one with the people and worked diligently for the progression of civic and religious matters of the town. She lived on the same corner from 1869 to her death. She raised a large family of eleven children. One child died in 1918 at the age of thirty-four years. Besides taking care of her family, she also worked in the local LDS ward. Mary clothed and fed five children besides helping to keep her husband in the mission field in Denmark for two years. She was a constant help among the sick in town, and almost everyone who was sick was sent to her. Mary was always a public worker, working in the Relief Society for many years. Moreover, she was a teacher for ten years and was Relief Society president for twelve years. 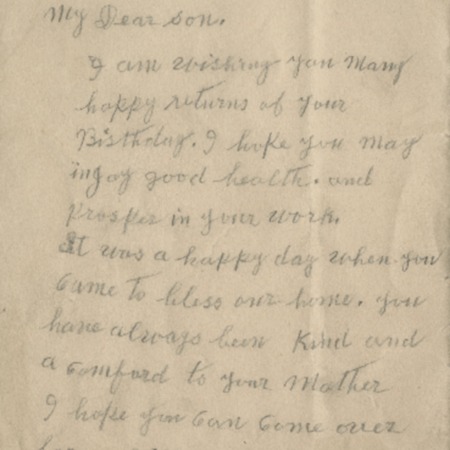 Correspondence from Mary Sorensen (his mother) to Alma N. Sorensen, dated 1929 (from Mendon), wishing him a happy birthday