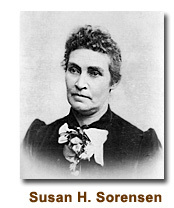 Susan Hancock Sorensen was born in Salt Lake City, Utah, on November 13, 1852. Her home was a log house and it was in the Fourth Ward. She was a daughter of James Hancock and Ann Melsome Hughes Hancock. James Hancock was born in London, England, on August 15, 1827. He was a mason by trade. He worked on the Thames Tunnel. Ann Melsome Hughes was born on June 21, 1831, in London, England. They are buried in the Mendon cemetery. Her father lived to be ninety-one years of age.

The Hancock family lived in Salt Lake City, Utah, at the time Johnston’s Army came there. Everyone had their house ready to set fire to it. During the time of Johnston’s Army, the Hancock’s were told that their homes would be destroyed and their food taken from them. It was in the year 1857. The Hancock’s vacated their homes during the Mormon Rebellion and hid away their food for when they came back. The Hancock’s traveled south, taking all of their possessions in their wagon. Straw and leaves were left in the house ready to start.

In the spring of 1862, the parents and their four children, James, Joseph, Ann Mary had packed everything in their wagons and were ready to come north. Brigham Young had called on several families to come to Cache Valley, Utah, to colonize it. They came to Cache Valley and went on to Mendon. They lived in the fort. It was a double street running east and west.

Susan married Jacob F. Sorensen on December 1, 1873.They went to Salt Lake City, Utah, in a wagon with a team of horses. Aunt Seny Sorensen Richards went with them. They stayed with Aunt Mary Sorensen Hill. Susan’s husband, Jacob, went on a mission to the North Western States. They had nine children under ten years of age.