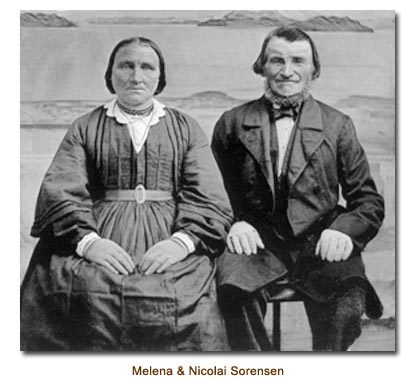 Nicolai lived with his family at Haverup, a very small village outside of Pedersborg, about forty miles west of Copenhagen. He had a hefty farm in Denmark and kept a milkmaid, a cook, and two farm men. Besides his dairy business, he had a wheelwright shop in which he made everything from spinning wheels and farm wagons to caskets.

The family were independent landholders. Their home at Haverup was built to form a square about one hundred and fifty feet on each side. One wing was used for the family living rooms. A large recreation room was in the east end. Leading from this were living rooms, bedrooms, and a large kitchen with bake ovens. The bedrooms had two levels of beds: the lower for the young children and the upper for the older members of the family. The other three wings of the building were used for farm machinery, hay, grain, and cattle. The inside of the buildings formed a court or yard. Outside of the buildings were the gardens, farmland, and pastures.

The Sorensen children started school around seven years old. They had exhaustive training in the Danish language and were educated in reading, writing, and arithmetic. Music and recreation had an important place in the education of all classes. They were taught to sing by musical notes, as well as memorization, and many of the family members could play musical instruments. The Sorensen family learned their national songs, folk songs, and they played and danced together. They were taught to do tasks and chores around the home. All the boys were taught to work on the farm, and in adulthood, they were considered good farmers.

Nicolai, a lover of music, sang many songs and played the violin. In his young adulthood, he belonged to an orchestra which played in the famous Tivoli Park in Copenhagen. Nicolai worked at times for the Danish government in checking forms of inns. Andrew Andersen, who married his eldest daughter, was an apprentice in his shop.

In 1854, Brother Fjeldstead, later of Logan, Utah, and his companion were the first missionaries to teach the LDS faith to the Sorensen family. According to Isaac Sorensen, one of Nicoali’s sons, “When I was fourteen years old the L.D.S. Elders came to our town, and in time all of our family was converted. Father sold his farm in the spring of 1856, and lived in his workshop until 1857,” when he left for Zion (i.e., Utah).

According to his diary, Nicolai and his family left Haverup on April 14, 1857, for Copenhagen. On April 18th, they left Copenhagen on the ship L. N. Hvidt bound for England, where they docked at Grimsby, England, on April 21st. Crossing England by train, on April 25th, they left Liverpool on the sailing vessel Westmoreland and arrived in Philadelphia on May 31st, 1857. Malena, the mother, was sick most of the journey.

Disembarking at Philadelphia, they went by train to Iowa where they purchased a wagon and two teams of oxen to make the journey to Utah. They arrived in the Salt Lake Valley with the Mathias Cowley Company on September 13th, 1857. They settled in Mill Creek and spent the first winter on a small rented farm.

They lived here until the approach of Johnston’s Army, when they moved south and stayed at Pondtown, now Salem, then returned again to Mill Creek. In 1859, Nicolai with two sons, Peter and Isaac, went north to Cache Valley, Utah. Later in the year, they went back to Salt Lake City, Utah, and moved their families to Mendon, Utah. They lived in the fort for some time, which consisted of two rows of houses running east and west through what is now the south side of the public square.

According to Isaac Sorensen:

In the spring of 1859 the move to Cache Valley began. I walked to Provo, forty miles south of Salt Lake, for my brother Peter. He and I with two yoke of oxen and a wagon spent nine days in reaching the site where Mendon now stands. The fort consisted of twenty-five log houses, with dirt floors. Our house had three rooms’, each room had a fire place. In the spring of 1864 the old fort was broken up and the city laid out, and homes built on the city lots of hewed logs with nice doors and lumber floors. We were each given twenty acres of farmland and a little hay land. 1867 was a year of much building, especially rock houses, and it was this year that fathers two story rock house was built.

According to Franklin Sorensen, the grandson of Nicolai:

When Nicolai was crossing the plains he offered to go back to search for a child which had been lost. On finding it and returning to the camp he was commended for his kindness and was told by one of the leaders to ask anything that his heart desired and it would be granted to him. He requested that he and his wife Malena, never be separated in this life. He realized this blessing as he and his wife died on the same day, 30 March, 1887, only a few hours apart and were buried in the same grave.

Nicolai Sorensen and his wife died March 30, 1877, and were buried in the cemetery at Mendon, Cache Valley, Utah. 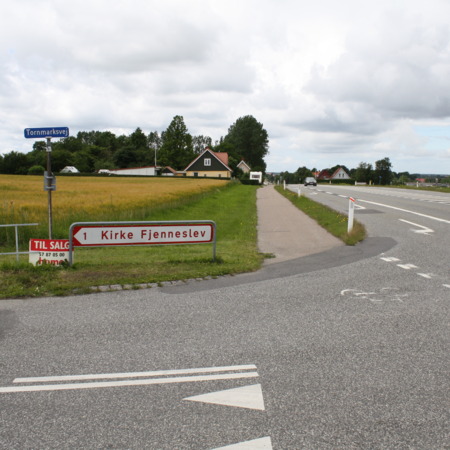 Sign pointing the way to Kirke Fjenneslev, Denmark, home of Nicolai Sorensen and birthplace of his son, Isaac Sorensen 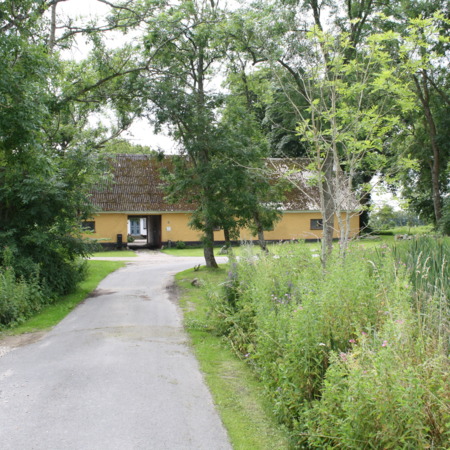 Photographs taken by Michael Robert Sorensen and submitted by Robert Sorensen with the following information: “[The Sorensen] ancestral family home at Kirke Fjenneslev on the island of Sjaelland in Denmark. This was the boyhood home and farm of my great grandfather, Nicolai Sorensen, son of Soren Abrahamsen, dating back to the year 1800, and originally consisting of about 69 acres. As was quite typical at the time for that part of the country, the home was built to form a square; about 150 feet on each side, with a courtyard at the center, surrounded by buildings that once housed a shop, stables and additional living quarters. The home was the birthplace of my grandfather, Isaac Sorensen, and eight additional brothers and sisters. Nicolai and his family joined the LDS Church (the Mormons) in 1854, and then, in 1857, decided to sell their home and land and embark on an epic journey to America, arriving in the Salt Lake City area in September, 1857. Nicolai, who was born in 1799, married his wife Malena in 1830. Both died on the same day on March 30, 1887. Details of this journey are depicted on the family website at SorensenFamilyHistory.org.”