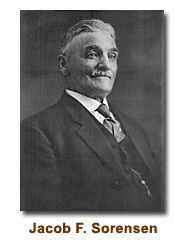 Jacob Frederick Sorensen was born September 29, 1844, on the island of Sjælland at Fjenneslev, Sorø Amt, Denmark. He was the son of Nicolai and Malena Olsen Sorensen. Nicolai Sorensen was the son of Soren Abrahamsen and was born June 6, 1799. Malena Olsen Sorensen was born in Fjenneslev, March 21, 1807. They were the parents of eleven children, Jacob F. Sorensen being the eighth child and fifth son in the family. The Nicolai Sorensen family belonged to the upper class in Denmark. The farmer belonged to this class. Their home was in Haverup, Sorø Amt, Denmark. It was built to form a square, about one hundred and fifty feet on each side. One wing was used for the family living quarters. A large recreation room was in the east end. Then the living rooms, bedrooms, and a large kitchen with bake ovens.

In the bedrooms there were two levels of beds: the lower beds were used by the young children and the upper ones were for the older children. The other three wings held farm machinery, hay, grain, and cattle. The inside of the buildings formed a court or yard. Outside of the buildings the people had their gardens, farms, and pastures. The children started to school around seven years of old. They were taught reading, writing, and arithmetic. The Danish language was exhaustively learned.

In 1854, Brother Fjeldsted of Logan and his companion first preached the Mormon gospel to the Nicolai Sorensen family. Soon after that, they sold their farm and went underway to America. They sailed across the ocean in the sailing vessel Westmorland in 1857. Once they arrived in Philadelphia, the Sorensen family went by train to Iowa where they purchased a wagon and two teams of oxen to cross the plains to Utah. Once the Sorensen’s reached Utah, they went to Mill Creek and built a home on the farm of a friend, a Mr. Jensen whom the father had known in Denmark.

Early in 1859, Nicolai, Peter, Isaac, and others came north into Cache Valley, Utah. Wellsville, Logan, and other towns had been settled on the east side of Cache Valley, but Nicolai and his two sons followed the western side and located Mendon. Later in the year they came back to Salt Lake and their family moved to Mendon. They lived in the fort for some time. It was two rows of houses running east and west through the public square.

Jacob Frederick Sorensen went to Jasper Lemmon’s school where he taught geography lessons in song. “Two hemispheres on the globe Eastern and Western. Five grand divisions on the globe, Europe, Asia, Africa, North and South America. Five oceans on the globe, Atlantic, Pacific, and Indian, Arctic and Antarctic, etc.” As a young man, he took part in recreation. He played the accordion in an orchestra. For many years Jacob took a leading part in Home Dramatics. He was also called to help haul rocks for the Salt Lake and Logan Temples.

In 1866, Jacob went with an emigrant train to Laramie to help them to Salt Lake. Joseph Hancock and Charles Bird were in the same company, which consisted of fifty teams and wagons from Cache Valley. The Native Americans would camp just across the creek from them in Mendon, Utah. Many times the Sorensens joined the Natives in their war dances and learned various parts of their language. The family would go to Logan, Providence, and Wellsville to enjoy their dances.

On December 1, 1873, Jacob Frederick Sorensen married Susan Hancock. They were married in the old Endowment House. It took two days for them to make the trip. Jacob and his family had a light wagon and fine team of horses. His sister, Seny Sorensen, went with them and stayed in Ogden, Utah, with friends by the name of Bell. According to the Sorensen account, “it was cold, but there wasn’t any snow on the ground. However we came home in a snowstorm.” Jacob Frederick Sorensen purchased the home of James Graham and later the home of George Bird. It is four blocks south of the U.I.C. Station.

Jacob Frederick Sorensen was an active LDS church member all his life. In 1898, he accepted a Mormon mission call to in the North Western States. He left his wife and ten children; the oldest, Fred, was twenty-two, and the youngest, Claud, was only six months of age. In 1900, Jacob returned home. Soon after this, he was called to work in the Logan Temple for two years from 1906 to 1907. He was a member of the LDS Sunday School for almost seventy years, and an officer for twenty-two years, as well as, a ward teacher for nearly fifty years. He later stayed at his daughter’s — Mrs. Zina Blanchard.

Jacob Frederick Sorensen helped to pioneer Bannock County in Idaho and took up a homestead, but Cache Valley had always been his home. He went on several Home Missions to Smithfield, Hyrum, etc., and recalled attending conference in Logan at the old bowery. He held the office of a high priest. Jacob Sorensen was the father of ten children: Mrs. Zina Blanchard and Fred Sorensen; J. Parley, Ammon A., Franklin Earl, and Chauncy L. Sorensen of Malad City, Idaho; Minnie Cooley of Salt Lake; Clara Longstroth, Ethel Walker, and Claud A. Sorensen of Mendon. He had forty-two grandchildren and thirteen great grandchildren. On December 1, 1933, his children met at my home to celebrate his 60th wedding anniversary.