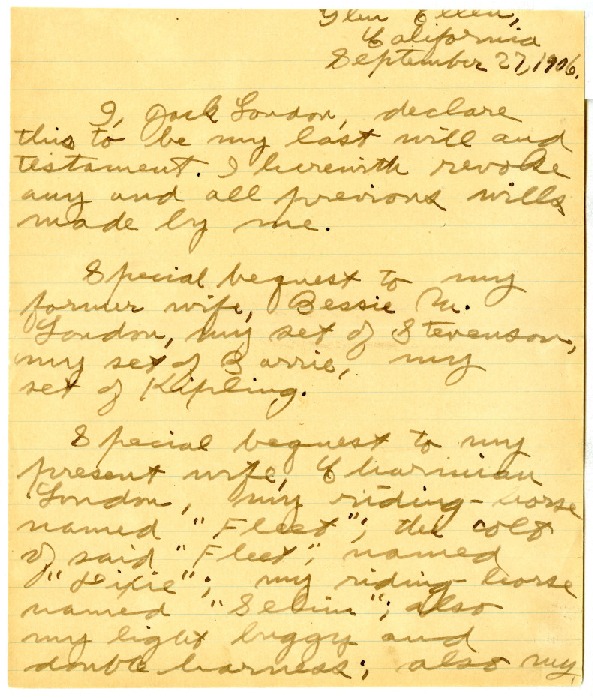 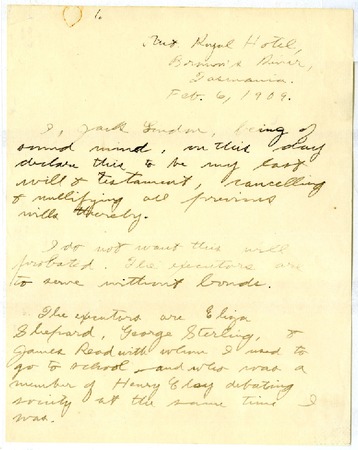 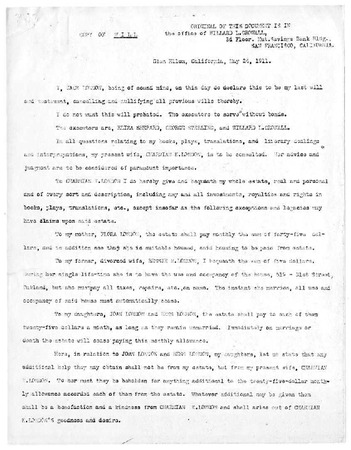 University Libraries’ Special Collections & Archives Division possesses three versions of Jack London’s wills.  The first, dated 1906, is a thirty-page document that distributes his money and possessions to the primary women in his life — his ex-wife, Bessie Maddern London, his mother, Flora Wellman London, his former nanny, Jennie Prentiss, his daughters Joan and Becky “Bess” as well as his wife, Charmian London.   As the years progress, Jack’s wills change, providing primarily for Charmian, his children, Jennie Prentiss, and his sister, Eliza Shepard, who was entrusted to manage Jack’s ranch and appointed one of the executors of his will.

Jack London’s 1906 will states his intentions were to ensure the three legatees — his mother, Flora, ex-wife Bessie, and wife Charmian — were to “receive adequate food, shelter and the luxuries”  “during their unmarried lives.”  He states his “primary consideration is my two children, Joan London and Bess [Becky] London.  They, before all others, must receive food, shelter and education — and by education I mean equipment for life.”

The 1909 will was changed to provide ex-wife Bessie “the sum of five dollars” and the use of the house, but she was to be responsible for taxes and repairs.  He was more generous to his foster mother, Jennie Prentiss, by arranging payment for her care in an “Old Ladies Home” and $15 a month.  His sister, Eliza Shepard, was to be given $1,000 and a monthly payment of $45. In 2012 terms, this would equal approximately $25,000 with nearly $1,125 in monthly payments.  He made arrangements for each of his daughters to receive $25 a month until they were married or 21, whichever came first, and any additional money had to be approved by Charmian, who was to inherit his entire estate.

Nearly everything is left to Charmian.  His estate would provide payments of $25 a month for Joan and Becky "Bess" until the age of 21 or their marriage.  Any additional money they required would be granted by Charmian’s “goodness and desire.”  The estate was to pay his mother, Flora Wellman London, $45 a month and provide for her housing.  Terms for his sister, Eliza Shepard, changed to reflect a sum of $2,500 and $35 in monthly payments.