Graveyard of Dreams: The Story of Aurora and Rhyolite: Building Rhyolite 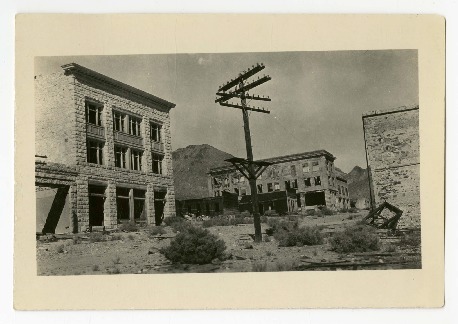 The buildings of Rhyolite

“Citizens of Rhyolite viewed it as the hope of Nevada, a metropolitan with a good school and all the conveniences of polite society.”[1] Local boosters went to a handful of men at the old Bonanza townsite, a mile down the gulch, and induced the bunch to move up en masse. Men on foot, burros, mule teams, freights, light rigs, saddle outfits, automobiles, and houses on wheels all came down the line from Tonopah and Goldfield raising a “string of dust a 100 miles long.”[2]

“The town was built in a hurry, but not as quickly as might be judged by descriptions on paper, patience, planning and waiting, long tiresome overland hauling and huge capital expenditures were put into its building.”[3]

“Rhyolite was the important camp. Surface ores were richer than the surface ores at Goldfield.”

“If there were no mines, there could be no city. There was nothing else to support it.”

“High prices for materials, labor, rentals and necessities of life were forgotten in the urgent demand for everything purchasable. Money was easy. It came easily and thus it went, until one day the people awakened to the fact that the climax of the boom had been reached. The inevitable happened.”[5]

“In 1909 talk of lessening of production and of ore viens [sic] petering out were circulated via grapevine system and wise or faint hearted folks began leaving just 4 years after Rhyolite began.”[6]

Before the Depression and in spite of the petering out process, Rhyolite’s record of shipments of ore would seem to justify the opinions of Bob Montgomery, W. M. Stewart, and Charles Schwab, who invested heavily to express the belief that Rhyolite would be permanent.[7]

← Montgomery-Shoshone
The Bottle House of Rhyolite →