Graveyard of Dreams: The Story of Aurora and Rhyolite: Rhyolite: The Beginnings 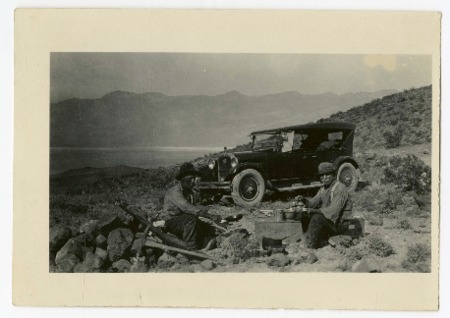 Shorty Harris (on the right), one of the discoverers of Rhyolite

“Hell-fire, Eddie, we’ve struck the richest jackpot this side of the Klondike!”[1]

Said one Frank “Shorty” Harris when he examined an ore specimen found by his partner, Eddie Cross.[2] These words started a rush to the area, resulting in large infrastructure buildup and the next hot mining town, one that would have the last big mines in the area. 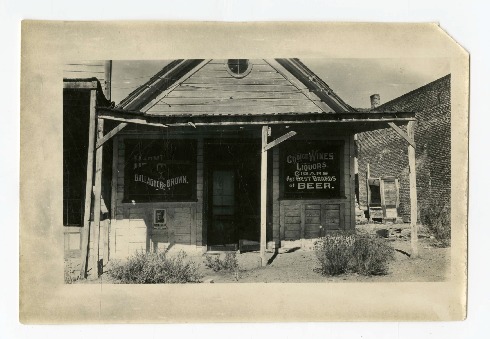 Nevada and saloons went together like a wink and a smile

“Harris fell prey to a bunch of tinhorn gamblers shortly after the claims were filed, and with too much ‘Oh Be Joyful’ (as he termed whiskey) signed his name to a piece of paper calling for $700 for his half interest in the new found claim. Cross, hung onto his portion, sold shares and prospered quite nicely until he accepted an offer of $125,000 for his interest from a San Fran broker.

“Shorty Harris, meanwhile, stayed drunk between Goldfield and Bullfrog, until his money ran out. He made many good strikes in the Death Valley area, but the dispensers of ‘Oh Be Joyful’ got it all.”[3]

The Bullfrog Mining District formed on August 30, 1904.[4] This district was made up of multiple townships, all hoping to become the next big city not only of Nevada but of the West. Towns like Tonopah, Goldfield, Bullfrog, Beatty, and Bonanza all lost out to Rhyolite, for “Rhyolite had only one thing to recommend it, but that proved to be enough, it was the closest camp to Montgomery’s Shoshone.”[5] Montgomery-Shoshone instantly became the new boss mine (biggest mine in the district) of Bullfrog due to the at sight (unsubstantiated) estimates of old-time miners who guessed the mine to be worth $165,766,700.[6]

← Aurora by Those Who Saw It
Camp of Confidence →