Graveyard of Dreams: The Story of Aurora and Rhyolite: Camp of Confidence 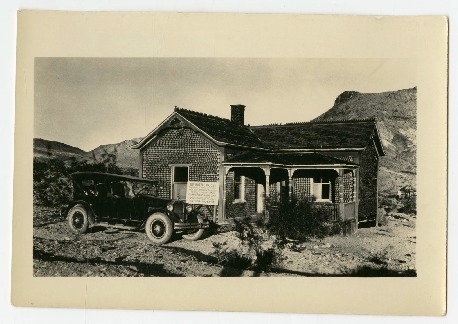 After Frank “Shorty” Harris’s and Ed Cross’s discovery of the red-speckled rock that looked a bit like the back of a bullfrog (which gave the Bullfrog district its name), dozens of miners flocked to Rhyolite.[1] The town grew quickly due to stocks in the mines selling so rapidly, which added to the excitement and fervor concerning the town. People observing the rush to Rhyolite had many different opinions; some called it the “camp of confidence” and others felt that it was full of “rainbow chasers.”[2] Only time would tell.

“By 1907 this thriving town of only two years had 6000 hustling inhabitants and possessed a modern telephone exchange, three water companies, three ice plants, electric street lights, board of trade, hotels with private baths, three railroads, four bands, dozens of saloons, opera house, symphony orchestra, four competing newspapers and two locally printed magazines. Block after block of substantial wood and stone structures had been built and wide smooth streets were lined with comfortable and commodious homes. A modern city developed before any of its highly touted mines had begun to operate in the black.”[3]