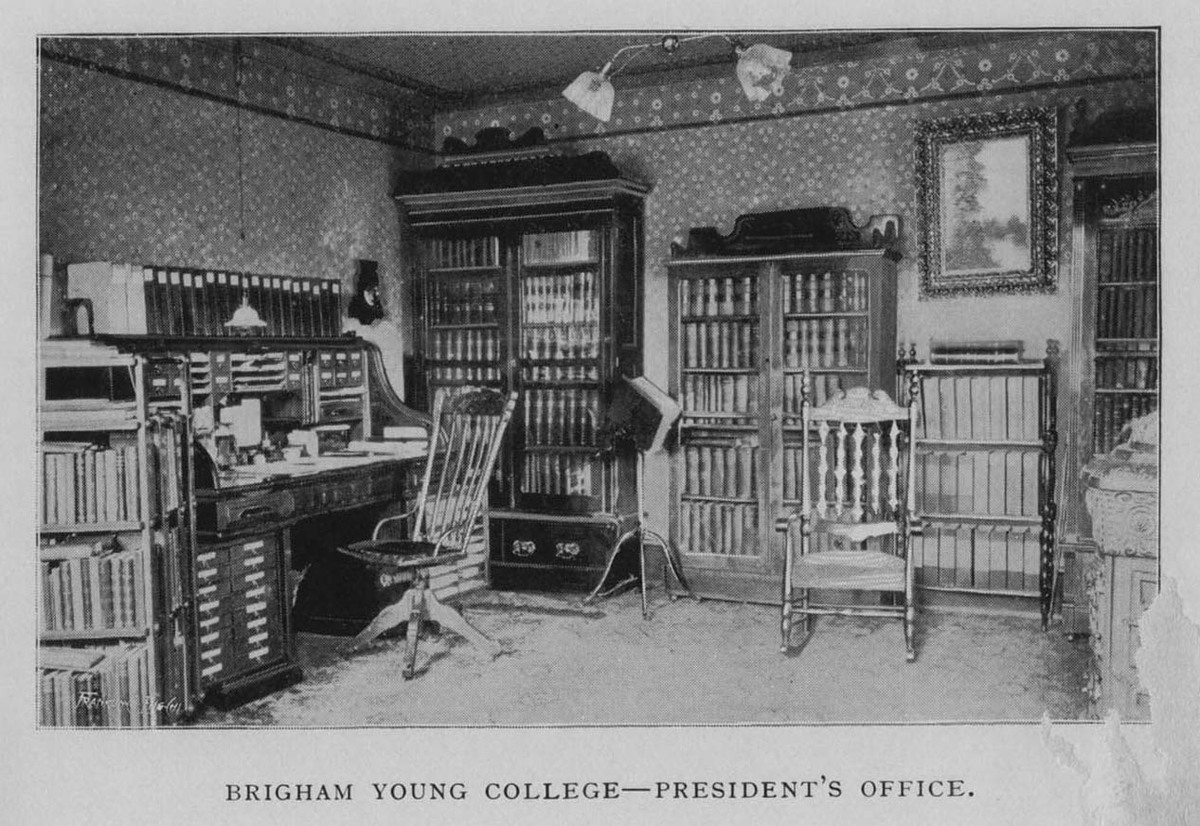 Originally the directors of the BYC were referred to as principals. In 1894 the title switched to president. Below is a chronological listing of the eight leaders of BYC: 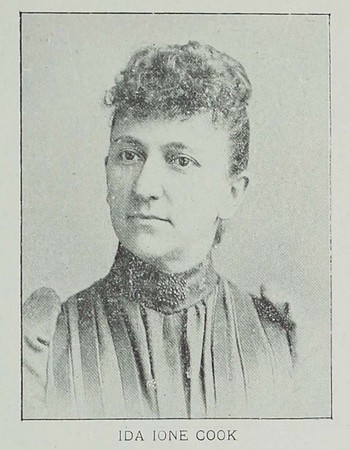 In the Memorial program for the closing of BYC in 1926, Cook’s tenure is remembered “for organization, for the acquisition of the upper campus in 1882 and for beginning the construction of the East Building.” Arnold Garr comments that “one would assume that the first principal of a Mormon school would be of the Mormon faith, but Miss Cook was not. She was one of three sisters who came West in the [1870s] to make their home.” Cook served as acting president of the University of Deseret from 1871 to 1873 and also as county superintendent of district schools. 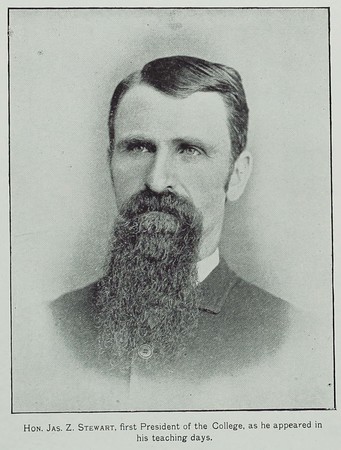 James Z. Stewart was born in Adams County, Illinois, on October 31, 1844. He was the son of Isaac M. and Matilda J. Downs Stewart. He received two years education at the University of Deseret (later the University of Utah), after which he taught school for a number of years in Draper, Utah. He was later a teacher at the Brigham Young College, and he became principal from 1884 to 1888. During his tenure, the college saw “the completion of the East Building, expansion in faulty, and growth in numbers.” He died on June 16, 1931, in Logan, Utah. 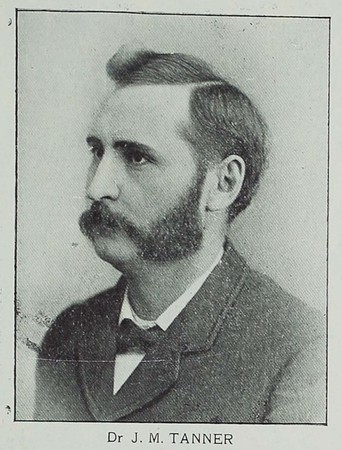 Joseph Marion Tanner was born on March 26, 1859, in Payson, Utah. He was the son of Myron and Mary Jane Mount Tanner. Tanner graduated from the Brigham Young Academy (present-day Brigham Young University) in Provo in 1878. Following graduation, Tanner taught mathematics at the BYA for six years. He was principal of BYC from 1888 to 1891. During his tenure, he was remembered for an “enlargement in faculty, for increase in students, and for beginnings in laboratories.” After leaving BYC, Tanner attended Harvard for three years. Following his graduation from Harvard, Tanner returned to Utah to become president of the Utah Agricultural College (present-day Utah State University) from 1896 to 1900. He died on August 17, 1927. 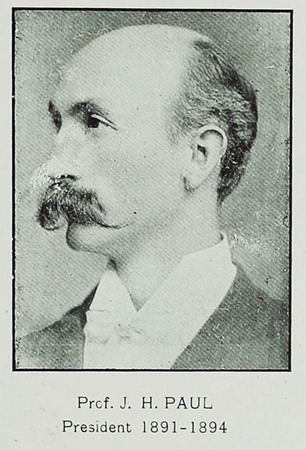 Joshua Hughes Paul was born in Salt Lake City, Utah, on January 20, 1863. He was the son of James Patton and Elizabeth Evans Paul. He was a student at the University of Utah from 1880 to 1885, however, no degrees were awarded at the time. Paul then went east to attend Illinois Wesleyan University from 1897 to 1905, where he received a PhB, MA, and PhDs. He married Annie M. Pettigrew in 1883, and they had six children. Paul was an instructor in literature and science at the University of Utah and later a professor from 1882 to 1889. For a brief time, he was the associate editor of the Salt Lake Herald in 1890. He then moved to Logan and served as president of BYC from 1891 to 1894. During his time at BYC, he was most remembered for “further increase in faculty, extension of high school courses to four years, and further growth in attendance.” Following his tenure at BYC, he was president of the Agricultural College of Utah (present-day Utah State University) from 1895 to 1897. In 1900 he returned to the news field and became the associate editor of the Deseret News. From 1899 to 1906, Paul served as president of the Latter-Day Saints College. He again taught at the University of Utah until 1926. He also ran as a democratic nominee for Congress in 1928 and 1930. Paul directed the old-age pensions in Salt Lake City between 1929 and 1932. He died on March 6, 1939. 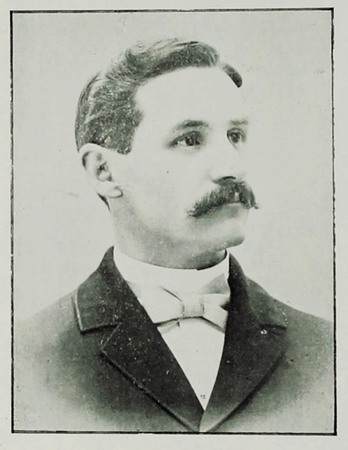 William Jasper Kerr was born in Richmond, Utah, on November 17, 186J. He was the son of Robert Marion and Nancy J. Rawlins Kerr. As a student, Kerr attended the University of Utah between 1882 and 1885, Cornell University from 1890 to 1891 and during the summers of 1891, 1892, and 1893. Kerr earned a BS, LLD, and an honorary DSC degree while studying at Cornell. He married Leonora Hamilton on July 8, 1885. Kerr served as the superintendent of schools in Smithfield, Utah, from 1885 to 1887. He was a delegate to the constitutional convention in Utah both in 1887 and 1895. His career with BYC began as an instructor of physiology, geology, and physics during the 1887–88 school year. He then served as an instructor of mathematics from 1888 to 1890 and again from 1891 to 1892. Kerr then went to Salt Lake City to work as a professor of mathematics and astronomy at the University of Utah between 1892 and 1894. In 1894 he became president of BYC and served until 1900. During his tenure, he is remembered for “expansion, for great increase in scholarship of faculty, for building the West Building, for inauguration of College Courses of 3 years duration, for increase in entrance requirements reaching the best standards in the West, equaled only by the University of Utah.” Kerr then went on to serve as president of the Utah State Agricultural College (present-day Utah State University) from 1900 to 1907. He left Utah for Oregon to serve as president of Oregon State Agricultural College from 1907 to 1932. He continued his career in academia by serving as chancellor of higher education in Oregon from 1932 to 1935. Kerr died March 15, 1947. 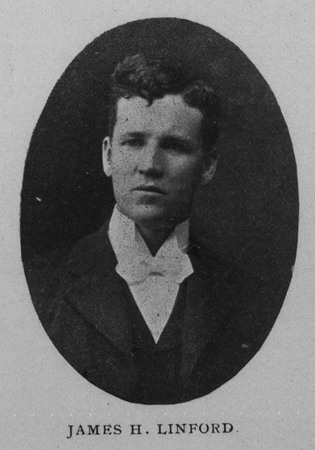 James Henry Linford was born in Centerville, Utah, on August 27, 1863. He graduated from the University of Deseret in June 1890. After graduation, Linford became principal of the Kaysville public schools. Shortly thereafter in 1893, Linford was elected county superintendent of public instruction. He married Mary Hooper Blood on February 24, 1892. During the summers of 1895 and 1896, Linford studied at the Hopkins Seaside Laboratory, a department of the Leland Stanford University in Pacific Grove, California. In 1898 Linford studied histology and bacteriology at the University of Chicago. He was also a student at BYC and received a BS from there in 1898. Following graduation, he taught at BYC as a professor of zoology from 1898 to 1900. On July 28, 1900, Linford was elected president of BYC and continued in that capacity until 1913. His tenure at BYC was referred to as the “golden age in the institution’s history.” His presidency is most remembered as having “courses increased in numbers, the faculty enlarged, the Mechanic Arts Building and Nibley Hall were built, students crowded the capacity of the buildings. Success came in every line of endeavor. The institution enjoyed the fullest confidence of the President of the Church and expanded in a healthy, normal way. During this administration, however, the Church policy changed, the College work was eliminated in 1909.”  From 1913 to 1929, he worked as the director of summer sessions and superintendent of correspondence study at Utah State Agricultural College (present-day Utah State University). Linford continued to teach at USAC from 1929 to 1939. 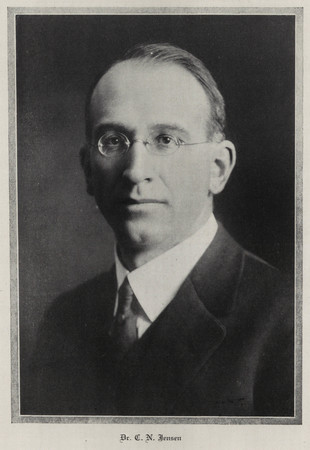 Christian Nephi Jensen was born in Ephraim, Utah, on June 18, 1880. He received a BSA degree from the Utah State Agricultural College (present-day Utah State University) in 1908, an MSA in 1909 and a PhD in 1912, both from Cornell. From 1905 to 1907, he was an instructor at Snow College Academy in Ephraim, Utah. He then went to the Utah State Agricultural College in Logan for the 1907–08 school year and taught as a professor of plant pathology from 1912 to 1913. From 1913 to 1920, Jensen served as president of BYC. In the Memorial Program from 1926, his tenure is recognized “as an effort to withdraw from competition by specializing in the field of education. Scholarship standards began again to increase and success came within the limited field. Recognition of the Institution’s work by the State office was obtained. The chain fence was built and a new heating plant installed.” After leaving BYC, Jensen became an instructor at Cornell from 1920 to 1921. He then returned to Utah and served as state superintendent of public instruction in Utah from 1921 to 1933 and district superintendent of public schools in Sandy, Utah, beginning in 1933. 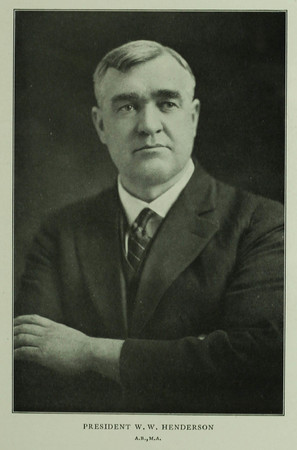 William Williams Henderson was born in Clarkston, Utah, on May 23, 1879. He was the son of James and Mary Williams Henderson. He received an AB from BYC in 1903 and then he did graduate work at the University of Chicago in 1904. He received an AM from Cornell in 1905 and later a PhD from the University of California in 1924. He married Survina Wheeler on June 26, 1901. Henderson was a professor of zoology at BYC from 1905 to 1910. He then served as president of Weber Normal College (present-day Weber State University) in Ogden from 1910 to 1914 and as Utah’s state entomologist from 1917 to 1920. During his time as the state entomologist, Henderson also served as the head of the zoology and entomology department at Utah Agricultural College and worked as the Utah Experiment Station entomologist. He was president of BYC from 1921 until its closure in 1926. His tenure at BYC is remembered “for careful, far-reaching plans, for executive leadership, for courageous struggle against increasing obstacles, for unity, for loyalty, for fighting strength from within. Scholarship grew as it had only grown during James H. Linford’s administration. The physical plant was largely made over [and] courses began to increase in number.” Henderson died on October 13, 1944. 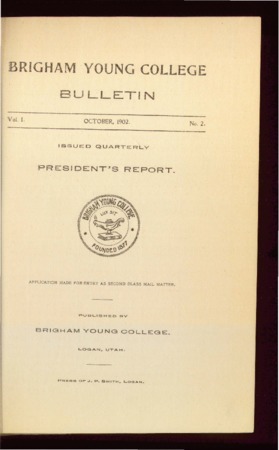 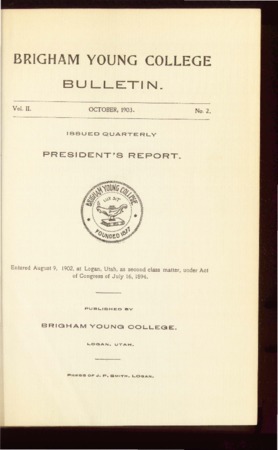 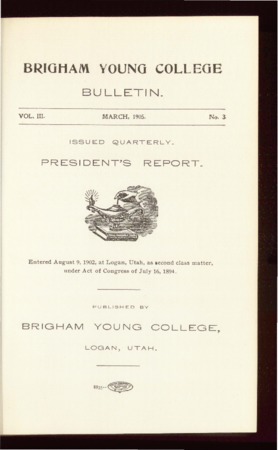 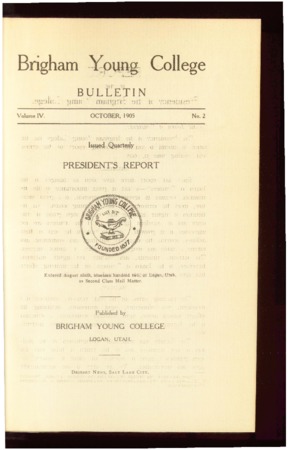